Pocket and the Seven Griffs 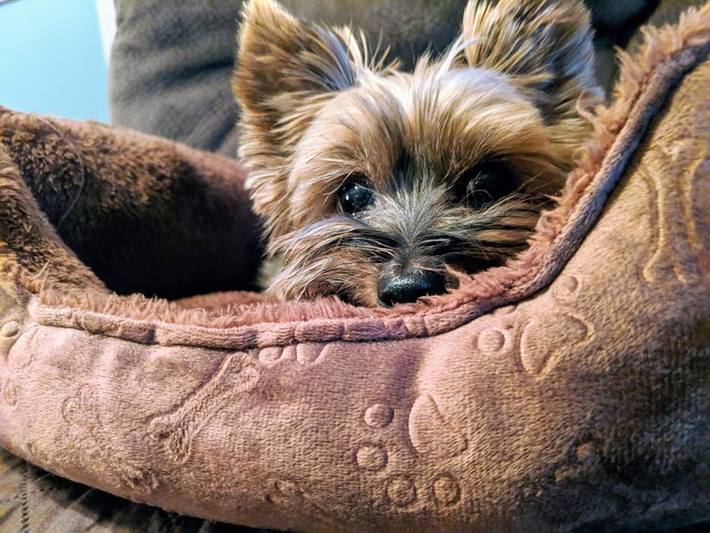 There once was a dog named Pocket who was the cutest of them all. She went to live with a lovely queen and her husband when she was just a puppy.  She met her sister, named Foley, who was the fairest in the land, at least according to the face in the mirror.   Yes, the face was her own, but until Pocket arrived, the sentiment was correct.

Although she would not admit it, Foley was the jealous type and saw Pocket as a terrible threat that must be eliminated. . One day, when the Queen and her driver were away, Foley told Pocket about a magical spot in the woods where all their dreams would come true.  Being a puppy, still naïve and not worldly enough to deduce her sister’s ill intentions, Pocket happily followed Foley out of the house and into the forest.

Pocket became concerned when they went deeper into the woods, and it grew darker.  They stopped by a river to drink when Foley said she would forage for berries and never returned. Lost and alone in the woods, Pocket crept forward softly,  calling Foley's name.

She heard in the distance the sound of dogs barking woof woof/woof woof/ woof woof woof woof woof woof, and followed the noise.   She found seven Brussels Griffons walking in a single file with pick axes on their shoulders, barking and marching in unison. Pocket jumped in front of them, startling the pack.

She introduced herself and explained that she was lost and needed help finding her way home. The Griffons surrounded her and began excessively sniffing. The leader, a Pup with a beguiling frown, pronounced to the others that she was no harm.

“My name is River,” she said kindly, “and these are my sisters Rover, Raver, Rower. Ripper, Rapper, and Dopey.” “We were mining bone,s but now we are hungry, so we’re going home for fourth lunch. We want to help you, but we don’t have the time; Fourth lunch is the most important meal of the day.”

Pocket suggested she would make their food and clean their house if they would help her find her way out on their first day off. That is how Pocket began to cook and clean for the seven Griffs. She had miscalculated how infrequently they took time off and was there a week without a single day of the search.

At home, Foley began to think, as her parents frantically searched for Pocket, that she had made a grievous error.   She asked a bird friend to find Pocket.  It came back an hour later to say  Pocket was living deep in the woods with a group of bone mining Griffons and was seemingly content.

Foley feared Pocket would never leave the Griffs, so she had to force her housemates to make her do so. She sent the bird with some bad chicken knowing Pocket couldn’t resist a tasty bird.  Foley injected the chicken with diarrhea-causing bacteria knowing no one likes a guest with the runs. When she found the dropped chicken in the backyard, Pocket scarfed it down.

An hour later, she had terrible diarrhea and gas. Instead of shunning her, the Griffons skipped worked to nurse her back to health. The mine owner, a Great Dane prince named Odie, arrived at the cottage to check on his missing workers, and when he saw Pocket fitfully sleeping,  he kissed her, which instantly revived her and made her pain disappeared.

The Griffons thanked him profusely, but he said it was more than his kiss that saved Pocket:  His Flaxel lip gloss deserved the lion’s share of the credit.  When Pocket began to miss her family, Odie showed her the way out of the woods, which he knew because he owned them with his brother Scooby.

When she got home, she was suspicious of Foley but could never confirm her sister's betrayal. vvShe prayed that someday she would have a sister like River.

As the years passed, River joined Pocket’s family after she retired from the bone mine. Maybe the spot in the woods was a place where dreams came true.

Posted by Foley Monster, Pocket and River Song at 10:45 PM