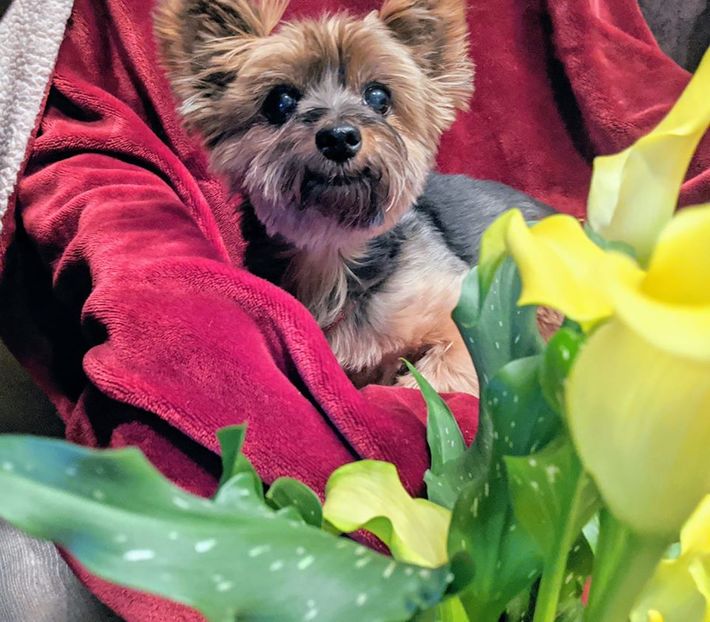 The first few days after Pocket arrived here were a whirlwind.  So many pups wanted to greet her that we didn’t have time to go home.  But, finally, Pocket being here became routine, as it has at your house, and that is the most troubling time.

I brought Pocket to our cottage on the river where we live with Blake, our pack leader, who takes care of us, Jax Gallagher, my trouble-making brother, Copper, my shy, self-conscious sister, and tiny Skye, a forever puppy.  I had worked miracles with Pocket for years, not just to keep her on the mortal side, but to keep her from me.  I hate when I have to add a room at our cottage.  I had to replant the rhododendron.

I showed Pocket her room.  I had it built by my many minions to exact specifications.  It had her squished kitty condo (she used to sleep in it, but, like Snoopy, she began climbing on top of it, unaware it could not support her slight weight); the little chair and red blanket she snuggled on; her red ball, her puppy bed, and a big new bed for her to sleep.  It also had screens on the wall constantly playing her memories, a big window that looked out on the river, that let in warm sunlight, and a ball throwing machine.  It was the best room in the house.  I was sure she would enjoy it.

In the middle of the night, I heard her paw step on the floor.  She was next to my bed. Pocket said she had never slept alone before and was scared.  I told her to fly up, and she could sleep at the end of my bed.

When I awoke, she wasn’t there.  I went to the kitchen and found her helping Blake make breakfast.  She was flipping pancakes while chewing on some bacon.  Blake, who didn’t let anyone in her kitchen, said she loved the help and called Pocket, the sister she always wanted.  What was I? Flaked liver in a savory sauce?

My other family members, who all annoy me, were eating breakfast and fawning over Pocket when there was a knock on the door. Three little dogs, which I did not know, said they were there to meet the most famous Yorkie in the world.  That had happened several times before.   I always obliged them, but I didn’t like them interrupting my breakfast, the most important meal of the day with a break in the title.  I told them I would be out to take pawsies with them after I ate. “Not you,” they said.  “Her!” pointing to Pocket.  “We read all the stories.  She is a real hero.”  Pocket scampered outside to meet her fans and asked me to take their pictures.  For the Big Guy’s Oldest Son’s sake!  The whole system was breaking down!

Hattie Mae and Lilly came to our house.  I was happy to see them.  We could go somewhere together and have fun, away from the family. They said they needed a model for their petite fashion line.  I replied I could make time for them in the afternoon, and they answered, “no, we want Pocket.”  She burst outside, gave them a big hug, and they skipped off together.

I was pissed.  I knew one dog who would understand being upstaged by Pocket.  I appeared to River as a ghost and told her how annoying Pocket was.

“I wish she were still here,” River said surprisingly.  “I miss her.  Sometimes I walk around looking for her.  And our parents are sad.  I am doing what I can to deal with theor grief.”

I began to repeat how it had affected me when River interrupted.  “Foley, Pocket’s passing isn’t about you,” River observed.  “It’s about me!  Our parents are giving me all their love and attention!  I am overwhelmed.  If I am told what a good girl I am one time, I am going rogue.”  I left River ranting.  Selfishness is so unbecoming.

I slunk back home and heard a big party going on inside.  I was ready to tell all those people, and Pocket, to get out of my house.  I opened the door, and everyone yelled, “surprise!  Pocket had thrown a “Best sister in history” party for me.  Everyone paid tribute to me, and Pocket talked about how hard I worked to keep her from the Bridge for so long.  Then she gave a bone broth toast, and everyone cheered.

I thanked them all, even if I didn’t feel like the best sister ever.  But I promised I would try to be.

I think I’ll keep her.