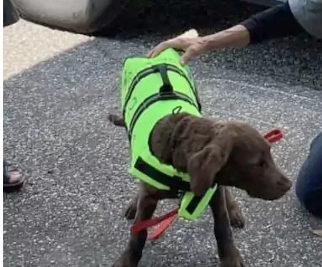 It was time to teach Pocket how to save a mortal dog.  I was assigned the perfect pup in need.  A dog named SkipJack was playing on a private beach near the Rappahannock River in Virginia. His Momma sat nearby, reading a book and enjoying the warm summer day.  She would look up to check on SkipJack then go back to reading.  The last time she looked up, SkipJack was gone.

The pup had been having a grand time chasing waves when one of them grabbed ahold of the slight dog and pulled him out to sea.  His mom ran into the water, calling his name, but could not see him.  Terrified, she contacted 911.

Meanwhile, SkipJack was operating totally on instinct and tried to swim back, but the under-toad would not let go.  Desperate SkipJack prayed for help.  I looked to the sky and saw the head angels had lit the Foley Signal, a picture of my face in the sky, and I knew it was a prayer only I could answer successfully.  I told Pocket to come, and we took the Yorkie poles back to the mortal land.

We found SkipJack struggling in the water a hundred yards from shore and going further out.  Pocket and I appeared to him.  I told SkipJack he had nothing to fear:  Pocket and Foley, the Yorkie sisters, were here for him.

I turned to Pocket. “Okay, this is the situation.  This dog is being dragged out to sea and is growing weaker.  Rescuers are on the way, but they couldn't see him even if they arrive before SkipJack was dragged away. What should we do?”

“Excuse me,” SkipJack interjected.  “What is going on?”

“I am teaching my sister, Pocket, how to save a praying dog.”

“Oh,” SkipJack said while spitting water.  “Could you do it some other time?  I seem to be drowning.”

Boy, this was a needy dog. I told him to be patient, and we would be with him in a moment, then turned my attention back to Pocket, who was in deep thought.

“He needs to stand out in the water,” Pocket said.  “I know!  He can stick his tail in the air, and the rescuers will save him.”

I told  Pocket that was a brilliant idea.

“Excuse me again,” SkipJack said.  “I hate to be a bother; for me to stick my tail in the air, my head would have to be underwater.”

“Your point?” I asked impatiently.

That was a good point.  “He should extend his neck, so his nose is higher,” Pocket suggested.

SkipJack said he would try.  His head wasn't high enough above the waves.  I told him to try and lick the sun.  He did; just as the rescuers arrived, they spotted the sun shining off SkipJack’s nose.  They sent a boat, and he was pulled from the sea.  The rescuers even gave him a life jacket, so it never happened again.

Pocket and I went back to the Bridge triumphant.   We were lauded as heroes.  The only drawback was that SkipJack, on his customer satisfaction report, said we were too chatty.

There are some customers you can never please.