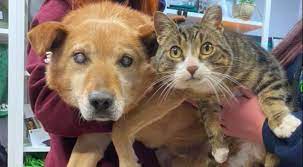 I have been very impressed with Pocket’s quickly adjusting to being an Angel. She has ascended to the position of patron saint for the infirm and scared.  I think it is the perfect position for my sister.  Mortal dogs like her are wearing bracelets that say “WWPD” for What would Pocket do.

Spike is the first dog who sought Pocket’s help.  A quiet, unassuming pup, he spent most of his life outside with his only friend, a cat named Max.  They had both been abused by their owner and were scared of humans.  When Spike began to lose his eyesight, he prayed to the angels for help.  Normally, I would have taken the case, but I figured Pocket would be the one to speak with Spike.

Pocket told Spike that she could arrange for the duo to get a new home. She knew that their parents had hurt them, but those people were outliers.  The vast majority of humans, especially those looking to help him, were kind and would make his life better.

Spike had one good reason why he did not want another home.  He was afraid that they would separate him from Max, who had become his eyes in the world.  Pocket promised they would not be apart.

Pocket knew she had made a vow she could not keep and didn’t know what to do. At wit’s end, she came to me for help to keep Spike and Max together.

She told me I was the only Angel she knew who could help her. Pocket knows nothing motivates me like flattery, and I said I would enter the parent's dreams and convince them that a blind dog and senior cat were too much for them and Spike and Max should be surrendered.  Meanwhile, Pocket prepared them for the abrupt change in circumstances that would be upcoming.

Even if a dog is unloved and abused in his home, being surrendered is still a frightening proposition. Every dog is afraid of the needle that sends so many to the Bridge without love. After being left at the shelter in separate cages, both pets feared being sent to the Island of Misfit dogs, an urban legend commonly believed to be where unloved pets are fated to go.

A sign that they were undergoing a reversal of fortune was when they were removed from their respective careers and handled for the first time with kindness and love.

The staff quickly determined Spike needed eye surgery for painful cataracts. At first, he had difficulty recovering from the procedure, but the dog immediately perked up when Max was put in his crate next to Spike. The staff realized they could not be separated.

As I have said, every pet in a shelter needs a hook to get adopted, and Spike had two.  He was blind and needed a seeing-eye cat.

When the shelter posted their profiles on the Internet, people were immediately interested, and the workers we able to pick the best possible homes for them.

Now, Spike and Max are in a new home together, always inside, not suffering from the rain or the cold.  They are fed regularly and get a lot of love.  Their lives are perfect, even with only one of them being able to see.

And it was another victory for the teeny tiny terrier duo.

Posted by Foley Monster, Pocket and River Song at 11:17 PM