Pocket is for the Birds

In between our modular home and the one to our left is Mommy’s gardens. On the edge of the gardens is a black dual bird feeder holder, one very big, one very small. Next to the feeders are two thin fern trees where thousands of birds live. There are Blue Jays, Robins, Sparrows, all different types of pretty birds. Foley ignores the birds like she ignores most things but I’ve become friends with them.

I have reached an agreement with them. They talk to the big birds for us so they don’t swoop down and carry us off. And I chase off any vermin that comes near them to steal the food.

When Daddy just takes us out to pee I usually hang out at the feeder and discuss the news of the day. One day, late in August, a pretty red bird was eating some of the seed that fell to the ground. I wandered over, pretending to smell for a proper pee spot, because neither Daddy or Foley liked me talking to the birds, and found a pretty red bird. I asked him what kind of bird he was and he said he was a Cardinal.

I told them I had heard of them while watching baseball with Daddy. He asked if Daddy was the one who had put out all this delicious food out for them and I said yes. He then said the birds wanted to thank Daddy. He told me to have Daddy put all his money on the Cardinals winning the World Series. I shook my head and told him Daddy said the Red Sox were going to win the World Series. The bird told me that wasn’t going to happen because their pitching staff did nothing but drink beer, eat chicken, and play video games.

I aarfed. Like that was possible. But the cardinal told me he knew it was true and he was going to prove it to me. He was going to drop a Cardinals cap on the driveway for me. He then flew away.

Later that night I told Foley and she laughed too. “Don’t listen to bird Pocket, there is a reason they call them bird brains.”

Just before the beginning of September I saw that cardinal again. I asked him about the cap and he said he dropped it and an old man picked it up and brought it in his house. There were plenty of old men here in the Village of the Pruned but he said not here, a couple of miles way from here.

This was unfortunate because I needed the cap to prove to my Daddy that the Cardinals were going to go to win the World Series. Then, that night, he told Mommy that his Daddy had found the Cardinals caps in his own driveway. I jumped up in his lap and told him he had to go get it right away, that it was the Cardinals rally cap.

When the Cardinals fell behind 3-2 Daddy panicked and decided that it would be better luck if I, the intended recipient of the cap, had it, so he stole the cap from his elderly Daddy. His Daddy chased him for half a mile but with bad legs and a bad back he fell behind.

So we are waiting for the game. The Cardinals better win. Foley has downloaded herself to St. Louis. They may have caught the rally squirrel but they will never catch the Rally Yorkie!

Then again Daddy and his Daddy bet their houses with the 92 year old man who rides around on his bike and rings his bell all day and Foley and I are pretty sure he’s insane so we’re not worried about the houses.

But to prove how devoted we are here is me with the Cardinal Rally Cap.

Go Cards, because we don’t want our Daddy and his Daddy being chased around the Village of the Pruned by an old bookie on a bike ringing his bell while being nipped at by a Rally Yorkie. 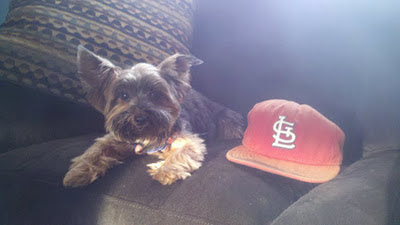 Posted by Foley Monster, Pocket and River Song at 6:07 PM