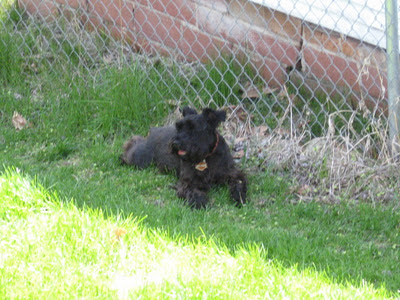 The last time our Pup of the Week, Scooter, was so honored, it was in September 2010. It was a dark days for us dogs. We had recently lost some of our friends to the Bridge and when Scooter’s groomer spotted red marks on his mouth and tummy the vet put forth two courses of action: One, he would be fine, the other would be another pup lost to the bridge. The diagnosis was IMHA. He needed a transfusion and lots of expensive treatments. But Scooter is a champ and he pulled through, fighting off long odds, helped by his Mom’s love.

Thirteen months later (an unlucky number) in the six days before the dead walk the Earth (also unlucky) Scooter got some unlucky news. He has a condition that causes his bone marrow to make too many red blood cells which can cause seizures, hemorrhages, blood clots to to the brain, tumors and death.

Even sadder, Cooper was about to come off the medication for IMHA. After a year of fighting off one illness and beating it, and maxing out his Mom’s credit card, he got hit with this new disease. It was like travelling to the end of the yellow brick road only to find a dragon threatening your life.

On Wednesday the vet told his Mom that his HCT level rose five points in two days which was very scary. Also she could not get the medicine he needed because it was not available yet. He told her to watch Scooter to make sure he was not showing any signs of needing a blood draw but never told her what those signs were. His poor Mom didn’t know what to do or which way to turn.

On Thursday Scooter and his Mom spent six hours at the vets. They took his blood which doesn’t seem nice and didn’t replace it with fluids for a long time leaving our friend a little loopy and tired. He has to go back a week from Monday for a CBC. While there they had to suffer through what always happens when you spend too long at the vet, they came in contact with someone who was putting down their pet, a six year old Great Dane with cancer, and they all sat together and cried at the loss of this magnificent lost.

So, again, a good dog, is unfairly suffering through no fault of anyone. Another dog, another senseless illness. Sometimes humans say it’s a dogs life, and having lived one for more than 11 years, I can attest that a dog’s life is a pretty darn good one. But sometimes it’s just not fair, and what has happened to Scooter, getting healthy only to find out he is sicker than he ever thought, well that’s just about the most unfair thing I can think.

I am asking for a miracle. We’ve done it before. Let’s say our prayers and get another miracle so a year from now we can celebrate Scooter as Pup of the Week because he did something wonderful and becoming ill, because Scooter is a super Pup, and certainly worth using a miracle on.
Posted by Foley Monster, Pocket and River Song at 10:28 PM