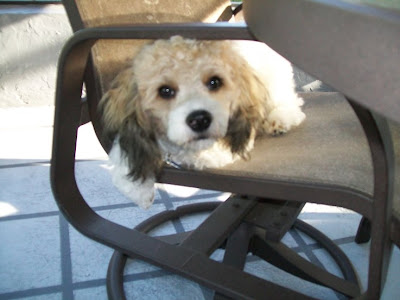 This week, after we had collectively suffered through tragic deaths of close friends I put on my editor's hat and tasked Pocket Dog Private Dog with finding a happy story for this weeks pup of the week. Pocket sniffed all around the Brigade's playground. She turned over rocks. She sniffed every tree. But there was nary a good story to be told. Then, during one of my late night trolls through the blogs I found it. Among the stories that had caused of sadness was one concerning Shadow's Mom. She had a lot of back pain, and she had a kitty scan, and they spotted something on her liver. A spot on your liver, like a spot of liver on your plate is never a good thing. Shadow asked the Brigade to pray for his Mom and we all did.

It did seem that lately everything was going poorly. So while we prayed for Shadow's Mom we had come to expect the worst.

But on Monday the good news arrived. The spot on the liver was nothing to be concerned about. Shadow's Mom was not going to need saving operations and life altering treatments.

Oh Shadow we can't tell you how much your Mom's good report meant to us. We have lost two Moms in the last two years and we don't want that to happen again. And Shadow you are so sweet we don't want you to have a moment of sadness.

It did not make up for those we had lost but it gave us a brief respite from the pain. And we owe Shadow, is Mom and the good doctor for that.

Shadow's Mom, while not facing an uncertain future health wise, still had a ways to go before she is one hundred percent. She has a large cyst on the base of her spine. This is what is causing her so much pain. She has been put on medication to help shrink the cyst. Every night Shadow has to wrap her medicine in bacon and feed it to her.

Then the doctor is going to take a large needle and break apart thee cyst. My Mommy has had lots of shots in the back for her back pain, which she said she got from raising two Yorkshire Terriorists. Unless Shadow has a Terrier sister I don't think Shadow's Mom shares the same pain with our Mom.

But the good news for Shadow is that when Mommy gets her shots in the back she has to take a lot of pills beforehand, and when she gets home she's loopy as heck. Hopefully Shadow's Mommy has someone like Daddy who can place her in a recliner with a blanket where she can recuperate the entire day and provide a lovely lap for Shadow.

There is a possibility that Shadow's Mom is going to need surgery to remove the cyst and none of us want that. So remember to ask the Bridge Angels to watch over her and help dissolved this nasty cyst.

Because when we make someone as sweet as Shadow Pup of the Week we only want to do it because she's happy, and nothing makes her happier than a healthy Mom.

So let's raise a Foleytini or two to Sweet Shadow, our Pup of the Week.

Posted by Foley Monster, Pocket and River Song at 9:48 PM