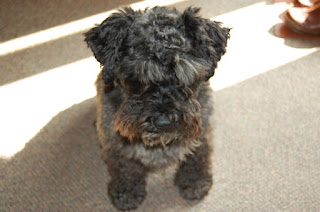 In all dog families there are the stars, the Hattie Maes, the Tommy Tunes, the Foley Monsters, and the quiet dogs who post now and then. We can call them the Pocket Writers. When there are multiple dogs in the family usually one dog does the barking while some are never heard from. But even if we never hear from them they are still part of our families.

This week we lost one of our quieter dogs. In the Lawson clan we hear from Lily, Moe, Scooter and Jilly Girl, but out of the 63 blogs they did on TB Jack didn’t sit up and bark until February 23. It wasn’t that Jack was not interesting. He just waited until he had something important to say. He had diabetes.

And what Jack had to say was very important because Jack was not doing well. Poor Jack reported to us that he was having diabetic seizures because his sugar was too high. He needed to get shots every day and he had to eat special food that was not particularly tasty. He signed that first blog Jack the Grouch, and with the shots and the bad food he had to eat who could blame him for being a grouch.

Lily was back at the computer for the next blog and the subject was Jack. The shots and the food were not doing the job. He was having more diabetic seizures which scared him and the whole family. He had to be kept at the vets, which we all hate, so they could monitor his blood sugar.

Things only grew worse. The doctors discovered that he had Cushing’s disease. Lily thought it meant he was a cushiony alien but it was a lot worse. As often happens with our friends, bad things began to occur all at once. Jack had eight seizures one day His heart began to malfunction, his blood pressure rose, and, even though we all prayed hard nothing was working. His Mom took him to work to keep an eye on him, which was hard, because those eyes were always leaking.

A short time later it seemed Jack was rallying. The specialist told his Mom it might be time to send him to the Bridge but his regular vet told her to try the phenobarbital to see if it would cure him and for the first few days it seemed to be working. But the other members of his pack were taking ill. Brother Moe had trouble walking and his Mom had to get a carrier for him which put all the weight on her. She took on even more weight when Jilly Girl needed to be tested for cushings. She shares a lot of traits with Jack so it would not be surprising if she had the same illness. With most of her pack suffering, we don’t know how their Mom was able to get through the day.

On April 11, Jack made the decision to go to the Bridge. He waited for his Mom to get home from her training, then she had her wrap him in a blanket, and brought him to the doctor and the dogtor gave him a shot to ease his way to the Bridge.

We did not know you, Jack, as well as we do our other friends, but we loved you none the less, we loved you because your Mom loved you , and we love her, and because we are a dog, and unlike humans, all dogs love one another, even if we fight sometimes.

We will miss you Jack. We pray that the rest of your pack recovers because your Mom barely made it through this experience and I don’t think she’d make it through another anytime soon. You run free and play hard Jack. We will be together again. And we promise to take care of your Mom and your pack.
Posted by Foley Monster, Pocket and River Song at 8:42 PM