My friends, I am sorry to say that the humans have made this world a place where you can get killed just for living in your American Skin. We have to take every action possible to make sure that this violence does not affect those we love.

As you know I spend most of my day on the computer. It’s holds heat well so it’s warm to sleep on. Occasionally I open it up, check on my friends, do some blogging, and see what is new in the dog world. This is where I read about Dave Reaver. He is a new kind of Dog Whisperer. But he doesn’t turn pups into well behaved robots. He turns them into weapons.

This is when I decided to take a page out of book of violent humans. They hide their weapons in their Pockets, and so well I. I won’t have a weapon in my Pocket, my weapon will be a Pocket.

I told her I was sending her to Red Sox spring training. She has always thought she would be an amazing baseball player since she is so good at chasing down balls. Instead I sent her to Dave Reaver to make her a lean, mean, short killing machine. 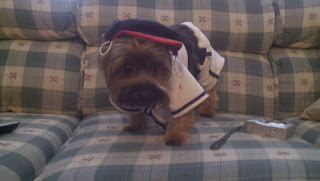 The brochure promised that Mr. Reaver would train Pocket to use her keen sense of smell to locate drugs, explosives, fugitives, missing persons and cadavers. I read that dogs have olfactory sensations 100 times that of humans. (And yet Daddy still farts under the blankets while I’m snuggled beneath them.) None of these traits appealed to me, except for the sniffing out of cadavers, which could come in handy, here in the village of the pruned.

Pocket came back a week later. She didn’t seem any different but that was cool. When you are utilizing a killer Yorkie the element of surprise is key. l asked her what she learned. She said that she was trained to attack on the word “Cochise.” I waited for our late afternoon walk. Daddy was going have to be the victim but I think he knows about that olfactory thing and was farting regardless. I’m sorry but he brought it on himself.

Daddy innocently began his walk with us. When we got around the corner, away from Mommy’s judgmental eyes, I leaned close to Pocket and said “Cochise.” 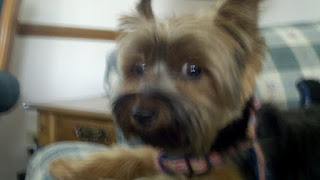 Pocket’s eyes grew dark. She turned to Daddy then ran at him. She jumped. Then she began licking his ankle and humping his foot. This is not what I sent her to Killer K-9 Kamp for. I whistled to call her off.

She came back over. Daddy looked down at his wet leg. “Pocket, what was that?” both Daddy and I asked.

“I don’t know,” Pocket said, “but if a German Shepard had done that to him he’d be shtiting bricks right now.”


Posted by Foley Monster, Pocket and River Song at 10:48 PM