March 03, 2015
Unlike Foley, who, when compared with Kanye West, would be called the one with the inflated sense of self-worth, I am a private dog, but when our book sold dozens of copies, and was briefly included in Amazon’s top million books, one of us had to go on a publicity tour, and, since Foley is currently booked on the main stage at Otis Campbell’s ice cream shop for eternity, that task fell into my small lap.  I would like to include some of the highlights:
Good Morning America:  Way too early in the morning America.  I spent the entire interview cuddled on George Stephanopoulos’s lap.
The Today Show:  My book agent thought another morning shows was a bad idea so he booked me for the last segment with Kathie Lee.  Things started poorly when I thought Hoda was her dog and went downhill when I drank their wine and puked on Hoda.
Live with Kelly and Michael:   No one told me there was going to be a giant.  I am freaked out by giants.  I thought I saw a kibble on his tongue and I tried to climb through the gap in his teeth to get it.  I got stuck and they needed the jaws of life to get me out of the giant’s jaws.
The Daily Show:  Mr. Stewart was very nice.  He came to see me in my dressing room.  He asked me how much I worked a week and I said a couple of hours. Mostly I sleep and eat.  He said that sounded good to him and he quit the show.  Afterwards my twitter feed got filled up with death threats.
Late Night with David Letterman:  He insisted I do a stupid pet trick.  I became flustered and peed on his floor.  He watched me, said “what the hell I’m out of here,” and peed next to me.
Tonight Show with Jimmy Fallon:  Good news!  I beat him in beer pong.  Bad news!  I peed all over the ping pong table.  Now some of our book profits are going to buy the Roots a new table tennis set.
Late Night with Seth Myers:  Of course I am sure you have heard of the poop incident.  Now Triumph the Insult comic thinks I am trying to steal his act.  It made the Puppy Conan segment look like a little dribble on the floor.

After my disaster on Seth Myers my agent decided no more TV for me and we tumbled out of the top million sellers, but that’s OK.  We did it so we would have memories of our friends and the stories of our lives would be transcribed forever.  Well, Foley did it for fame but  she was pretty famous to begin with.
So back to the bed and the recliner for me.  Hopefully River will go on our next publicity tour.  How much trouble could she cause?
Maybe you should all up your insurance beforehand.
For the further adventures of Pocket Dog click HERE 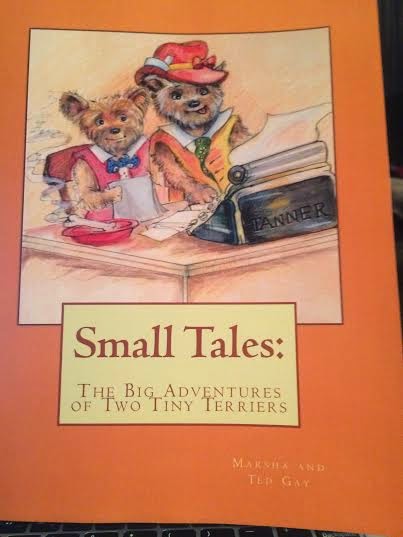