From my perch here at Rainbow Bridge I watch humans, particularly Americans, destroying themselves quicker than any outside terrorist organization could.  There seems to be arguments that black lives matter or that white lives matter or if that all lives matter.  I can tell you as someone on the immortal side of the Bridge that all life is precious from humans to the most microscopic beings.

I wish I could say it was the same for all dogs but it isn’t.  There is one type of dog who has it tougher than all of us and I would like to change that now:  # BlackDogsMatter

Black dogs suffer from what is known as Black Dog Syndrome.  Black dogs are by far the most surrendered dogs in shelters and they are the least adopted.  A Black Dog left in the shelter is going to be there for a long time.  It may never leave.

A black dog can be the sweetest, best natured problem free dog at a shelter but people still will be hesitant to adopt him.  People love dogs with markings and black dogs don’t have any markings.  Studies show that, for some reason, the black coat discourages parents from adopting.  It is true with cats too.

Scientists did a study where they showed the same dog with black fur and light fur and more people said they would adopt the dog with light fur.  Many people said that the thought of a black dog scared them.

When dogs who have never known human love pass over to the immortal side many of them are black dogs.  My crack staff works very hard to find dog loving humans on this side of the River who will take in the black dogs and give them the love they never knew when they were on the mortal side. I am happy to say we have found homes for every single one.

But I would rather see black dogs arriving here who have known love on Earth so if you are searching for a new dog please remember.  #Blackdogsmatter 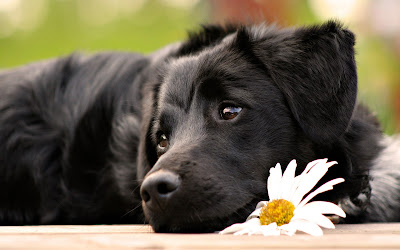 Posted by Foley Monster, Pocket and River Song at 9:58 PM