February 14, 2016
I am asking for prayers for some friends.  I am among an army of angels waiting to fly these prayers up to the Big Guy so pitch in with prayers for the following friends.

You should know Paco by now:  My dear Italian friend.  Last week I wrote about Kiera whose name, thanks to Angel Apollo, disappeared from my list of new Bridge members.  Paco’s name has not appeared on my list because Paco fights every day to keep his name off that list.
He has been suffering from serious respiratory attacks.  Poor Paco has gone through several of these in the last month.  With each attack his Mom becomes more concerned that she is witnessing his final breaths.  She treats him with Lasix which has stopped the attacks.  She just wants more time with her little man, and that is not too much to ask.  A little more time.  Please say a prayer that gets lots more days in the Italian sunshine.

This week we received a terrible shock.  Our friend Smoochy has bone cancer in his leg.  He is a big boy and the doctor does not think it is advisable to remove the leg.  So now his beloved Mom Kay must “keep him comfortable.”  She loves Smoochy so much.  (Everyone who has ever Smoochy feels the same way.  He is the Sweetest boy.)
I hate the term “Keep him comfortable.”  A parent always keeps us comfortable.  And no parent needs to be told to love their beloved pet every day, or to count every day as precious.  The doctor needs to say “go home and pray for many more comfortable days” and I ask you to do the same.  Pray for many more comfortable days for Smoochy.  His family and friends would have a hole ripped in their hearts if anything happened to him.  He  is one precious pup
.

Last night I found out that our dear friend Hannah Banana has to have a mass removed.  I don’t know where it is located, how big it is, or how serious it is.  I just know I hate to hear “has to have a mass removed” as much as “keep him comfortable.”  Hannah helps her Mom run the http://www.iloveyourdog.net/ page where you can buy, or gift, reasonably priced pet toys and home made treats and where Hannah and her Momma Kim give part of their profits to unrescued dogs.  She is the most special best friend in the world, warm and giving, and we need prayers that she comes through the operation safely and all tests come back negative.

Our wonderful friend Bella, who does such good work visiting the elderly every week and has so many humans who count on her companionship, is going through stomach problems again.  Last year she had to have emergency surgery because, after weeks of tests, the vet discovered that Bella had a bit of stuff bunny stuck in her intestines.  So far all her tests have come back clear but Bella is showing the same symptoms she showed this time last year and Mama Susan is very concerned about her baby and she would greatly appreciate your prayers, as would I.

Speaking of tummy troubles our great friend, advisor, fashion designer, seamstress and inspiration Hattie Mae has had tummy problems this week.  Her Mommy is hoping that it is just a food problem but whenever Hattie isn’t feeling well we put on extra angels because we know we are going to be overwhelmed with prayer requests and we encourage them.  We want Hattie to be 100 percent OK. 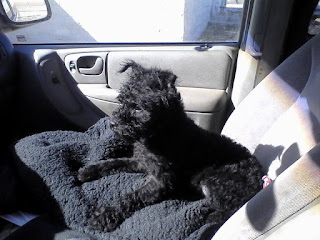 Angel Apollo’s newest rescue, a puppy named Rabbit, might have Parvo.  He has been with Apollo’s pack less than a week.  Once Apollo’s Momma Kim fosters a dog that pup becomes part of her family so Apollo needs prayers for a new family member.  I know you will come through. 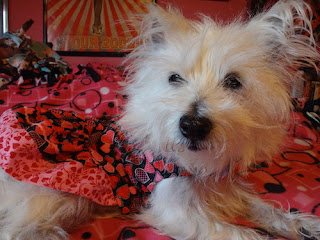 Finally we must mention our friend Whitley from the Whitley Westie blog (http://whitleywestie.blogspot.com/)  Like many of our friends she has had problems with her legs lately, first her back, and now her front.  Her Mom had her outside to do her business.  She was wearing her sling.  While she was there a man drove by and saw her then viciously informed Whitley’s Mom that she should do Whitley a favor and put her out of her misery.   You can imagine how much that hurt Whitley and her Mom.   It makes us howling mad.  Whitley’s Mom shot back what she called some HBO words and good for her.  We need you all to send some hugs Whitley’s and some prayers that her legs get healthy enough that she runs down that man and gives him a good bite on the butt.