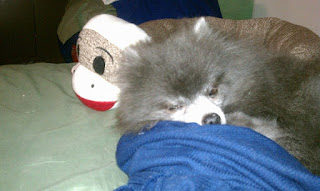 I was comfortably in bed yesterday morning when I heard a scratching at my door.  I growled to myself as I crawled out of bed, put on my robe, and answered the door.  On the other side was my longtime friend Beaux Jangles.  “Beaux,” I said surprised “what are you doing here?”  (After four years at Rainbow Bridge I should really stop asking this question.)
“I don’t know,” a confused Beaux said.  “I went to bed last night at home, and I woke up here.”
“Uh-oh,” I thought.  Beaux was born before me, and I preceded him to the Bridge, so that would make Beaux….I told him he should come into my cottage.
He stayed in the doorway. “Why are you living in a cottage, and wearing a robe, and walking on your back two legs, and, oh mierda.”
I put my paw on his shoulder and guided him into my house.  I sat him down on my couch where he momentarily curled up, then jumped off.  “I need to leave.  I have to get back to my mom.  I need to take care of her.”
I had seen this too many times before.  I ran in front of him and blocked my door.  “I am sorry Beaux, you can’t go back, but you will always take care of your mom.”
“How?”
“You are her angel now.  You can watch her on one of our many Angel TV sets.  Tommy Tunes has a mansion filled with them.”  I turned on mine, fiddled with the remote, and the picture showed Beaux’s somber mom, with her Mini-Me and her friend Greg.  Beaux put his paw on the screen where his mom’s face was.
“She is so sad.  I should be there.”
“I know,” I said, then hugged him.  “You will be there as a ghost soon.  Leo will teach you how to do that, but first, you have to take the oath and get your wings, and then we will send you to Paco’s class to help heal both your soul and your mom’s.”
I had a whistling outside my door then my mailbox shutting. I grabbed Beaux by the hand and brought him outside.  “You have to meet my mailman.  Harry!” I yelled.
Dirty Harry, a stray dog who had arrived last year, roamed the streets near Beaux’s mom’s house.  He had waited for her every day and accompanied her on her mail route.  Dirty Harry had been hit by a car and passed over in Beaux’s mom’s arms.  Since then he has taken her job and is a Rainbow Bridge maildog.
He saw Beaux and dropped his mail.  He ran to him and gave him a big hug.  “I know you; you are my friend Miss Yolanda’s boy.”  The dirty boy continued to lick Beaux.  “She was so wonderful to me.  She said we are brothers.  We are going to be brothers.  Come with me.”
Harry began to drag Beaux down the road, frequently stopping to hug him and ask him more about his mom.
Harry finished his route.  I told them it was almost time for the big welcoming party for new angels.  There would be lots of food, especially chocolate cake and other tasties we dogs can’t eat on the mortal side. 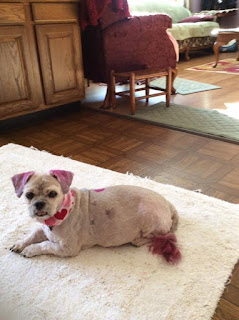 I met a pretty white dog, with a red head and tail, sitting by the road.  I introduced the new Angel, Sassy, to Beaux and Harry.  Sassy was 14 years old and lived with her mom Melissa Samens in Wisconson.  Sassy was learning how to cross the River of Life as a spirit and trying to comfort her broken hearted mom.  “I just want her to know I will always be there,” Sassy said  She had friend at the Bridge, but I told her to come with us where she would meet hundreds of more friends that would help her take her mind off of missing her mom and provide lots of fun for her while she was waiting for her family to be reunited. 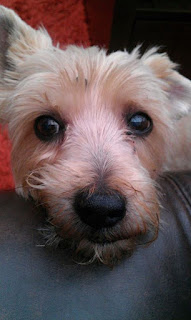 We moved on to meet Scooby, the cutest little white dog ever, who had lived with his family for 16 years.  We were quite the pack of senior dogs.  Scooby had been everything to his family.  They gave him the loving nickname Mr. Phoof, and he certainly looked like one.  An adorable poodle he filled his family with love and laughter for years.  He was anxious to learn the best way to help his family over their mourning period too.  He wants them to know just because he is gone does not mean he won’t be near his family forever.
We went for a walk over a hill then arrived at a table where hundreds of dogs sat.  They all stood and clapped for the new angel.  Beaux Jangles, at the head of the table, we raised a Foleytini toast to him, and then we all cheered.
Don’t worry Yolanda we will take care of your babies as they take care of you.

Posted by Foley Monster, Pocket and River Song at 4:52 PM