Tails From Rainbow Bridge: Gizmo, Tiny and the Power of Angel Prayers 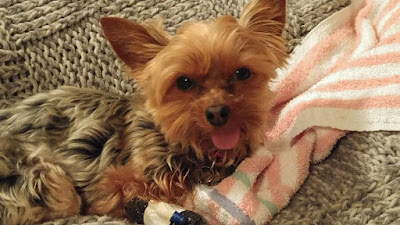 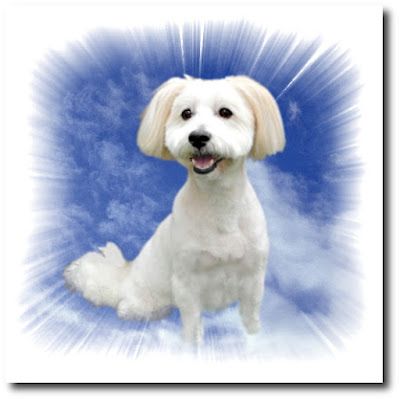 I have been spending a lot of time with my friends Gizmo and Tiny.  Gizmo arrived at Rainbow Bridge four years ago, shortly before I did, and Tiny joined Gizmo a short time ago.  Both passings broke their parents' hearts.  But they were required here because Gizmo and Tiny’s parents were about to need a lot of prayers.
On April 3, Gizmo and Tiny’s dad collapsed and had to be rushed to the hospital.  Tiny frantically ran into my cottage panicked about what to do.  He was a new Angel and knew his prayers would help his dad.  Gizmo followed right behind him, and we calmed down Tiny, and we went to the big Bridge cathedral to pray for their dad.
I stayed with them at the cathedral during the night.  Neither Gizmo or Tiny would leave, except for ghost visits for more than a month.
Their dad, Brian, was admitted to the hospital.  He was told he was a complicated case.  His blood pressure rose and fell with each test.  Their mom, who had just lost Tiny, faced losing her husband too.  “We can’t let that happen to mommy!” Gizmo said.
“Daddy is not too crazy about it either,” Tiny chimed in.
Through the night Daddy Brian went through several tests, got assigned a critical care specialist, and finally, after more than twelve hours, got a room.  His exhausted mom went home for some restless sleep
Once Daddy Brian was in his room I left Gizmo and Tiny to their prayers.  I checked in on them every day.  They never left the cathedral or slept.  Four days after Dad Brian entered the hospital he was released.  Gizmo told me that their dad had Langerhans cell histiocytosis.  The name of the disease was bigger than we three dogs combined.  I read a lot about it and understood nothing.  To break it down it is a serious respiratory disease.
He was sent home with a new oxygen machine, new tanks, and a BiPAP machine plus lots of little dog angel prayers.  I told the praying duo that their dad was home safe, but they continued their vigil.
They were in the cathedral on April 28 when their dad was scheduled for surgery.  Their mom had to get their dad into the van, then into the hospital, then into the gown, while doing several oxygen tanks switches only to be told the operation had been canceled.  The cathedral had never heard spoken such cuss words of frustration from little dogs as it did that day.
Finally, on May 12 Daddy Brian had a successful surgery.  When he got home Gizmo and Tiny finally left the cathedral.  They were both very tired, but they still flew into the sun which transported them to their parent’s side where they stayed near them hoping they could sense their ghostly presence.
Daddy Brian still needs lots of prayers and Gizmo, and Tiny will be in the cathedral praying for him.  Tiny’s might be a little Yorkie but her passing to the Bridge may have provided the necessary prayers to keep their parents together.
Sometimes senseless passing to the Bridge sometimes makes sense.

Posted by Foley Monster, Pocket and River Song at 1:22 PM