Tails From Rainbow Bridge: Rogue: The Rescue Who Thought it was Too Good to be True 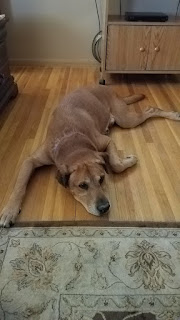 Age is never a dog's friend.  We have a short time on Earth and can't waste a day, never mind a year.  Being in a shelter is wasted time.  The irony is the older you are, the more likely you will remain homeless.  Every day makes your likelihood of adoption more remote.

At seven years of age and living in a shelter, Rogue knew his life was wasting away.  Being a large and cumbersome dog did not aid his chances.  The country turned to small lap dogs who could use their cuteness to their advantage when people came looking for a dog.

Rogue had been interviewed by angels before but had never been chosen to replace them in their family's hearts.  Frankly, he was getting discouraged with the entire process. He was beginning to think it was his destiny to live the rest is his life in a cage.  He could deal with that, but the thought of being unloved at the Bridge for eternity kept him awake so night.

That is why he was skeptical of his chances of getting adopted when new angel Kane came to interview him.  Kane immediately recognized that Rogue was a dog that would thrive living on a farm, protecting the land from vermin, and being a good company at the end of the day.

Two hours after the interview, Kane returned to tell Rogue that the next day his father would come and adopt him and let him live out the rest of his years on a big farm.  Kane was slightly taken aback by Rogue's lack of enthusiasm.  That night Rogue shared why he was not excited about his shelter-mates.

"They are sending me to a farm where I can play in the fields all day and protect the land from varmints," Rogue said dejectedly.

“Don’t you know when they tell you that you are going to live on a farm and play with the bunnies that you are actually going to the Bridge?”

“I don’t think the nice angel would have lied to you.”

“Bah, I’ve been lied to by plenty of angels. They say I am on the shortlist to be adopted, and then someone else gets picked.”

“I think this time it will be different.”

“Well, we will have to see tomorrow.  I am sure the man who comes for me will be Death.”

When Kane’s dad, having been instructed by his angels, arrived at the shelter, Rogue looked at Benny and said, “I told it was death.”

Thankfully Rogue could not have been more wrong if he had been a White House COVID advisor in the teens.  The man put Rogue in his vehicle and brought him to an actual farm.  Rogue got out and met his new sister Daisy who showed him that Kane’s promise was true.  He got to run in fields, chase bunnies, and protect the land.  Then he came inside, ate the best meal of his life, and slept on the most comfortable piece of furniture ever.

That night, when, for the first time he could remember, he went to bed warm, well-fed, and comfortable, Kane came to visit him.  Rogue apologized for not being more grateful when he was chosen.  His new life was everything Kane said it would be and more.  He thanked the angel for saving him.

Kane told him he was welcome and thanked him for saving his family.  Rogue had never been more proud in his life, and he finally had a family.