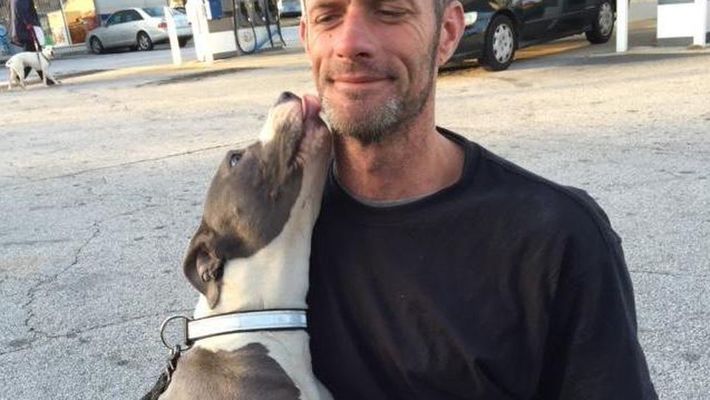 Jesse, a homeless man, and his dog Baby Girl became well known in eastern Detroit.   While Jesse charmed onlookers with his quick wit and gifts as a tale-teller, Baby Girl delighted the crowd by riding on a skateboard while wearing sunglasses and barking, “I love you.”

Their efforts were especially appreciated during the pandemic when people searched for a distraction.  A black and white bulldog on a skateboard wearing glasses certainly fit the bill.

Their favorite spot was the Harbortown market entrance, where they performed for people entering the shopping centers,  restaurants, and nearby offices.

Daphne Johnson befriended the man.  She considered him to be kind and sweet.  She leaned on him for advice about her Pomeranian and encouraged him to start a dog walking, training, or cleaning business.

When he and Baby Girl weren’t entertaining the masses, they lived in a tent pitched by the river.  Before falling on hard times, he worked as a dog trainer on the east coast and dreamed of being the next Eminem.  He loved his only son, to work on cars and to blare music.  His father maintains it was during this period that he fell on hard times.  He was just in his teens when he was arrested for the first of many drug offenses and given a prison sentence.

The criminal record made it hard to find work, and Jesse bounced from one low paying job to the other. It was during that time that he and Baby Girl found one another.  After Jesse got in a fight, they fled to Detriot, fearing he broke probation and would go back to jail.

Jesse found a paying job working restoring houses and guarding a restoration business at night.  The money wasn’t enough for a home but was for food, which Jesse gladly shared with Baby Girl.

Jesse maintained a Facebook page.  He posted updates from the public computer at the library.  His last entry warned of a violent sexual offender who was pretending to be homeless.

A few days later, Jesse did not show up for work at the restoration shop, and his absences were reported to the police.

At 6 PM on December 10, Jesse’s body was found in the 6400 block of East Jefferson Street.  He had been beaten and shot in the head.  Baby Girl was with him, also wounded, but the injuries did not seem mortal.  Baby Girl was brought to the vet, where sadly, she passed before a doctor could exam her.

People who grew to know and love Jesse and Baby Girl mourned their passing.  If they knew what was awaiting the duo who brought joy to so many, their sorrow would be abated.

Baby Girl arrived at the Bridge a few minutes after Jesse did, although the way they acted when being reunited, an observer would have thought they had been separated for decades.  I had the honor of showing them the mansion they would be living in as a reward for bringing happiness to so many strangers.  Any sins committed by Jesse had been forgiven.  They would never want for anything again.   The mortal world may have punished them, but they received their beautiful reward in the immortal world.

Their time on Earth was sad, and now their lives are filled with happiness.  I know it is a human’s job to stay alive as long as possible, but when a life has been challenging, and the departed has beauty in their hearts, while you mourn, be happy because the suffering is over. All that lays before them is happily ever after.

Always remember to live your life the proper way.  The mortal side may be challenging, but the reward will be worth it.