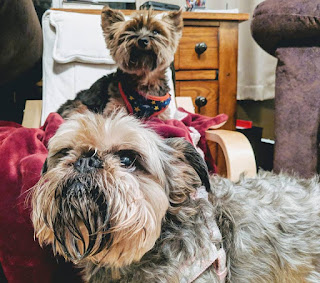 The Puppy Bowl is usually a feel-good occasion where shelter dogs play together, are amazingly cute, and hopefully get adopted. But this year, it turned into a blood feud, but because Pocket was coaching team Fluff while River was leading team Ruff.

The coaching positions were usually honorary, but River is exceptionally competitive and, having lost a debate last week, was determined to win the bowl game. Pocket, unaware of her sister’s obsession with victory, told her chargers to have fun, be cute, and get adopted.

The week before the game, while Pocket slept, River snuck out of the house and held puppy bowl practice. She made her players run for hours, lift weights with their mouths, and practice peeing on command, in case any member of Team Fluff broke into the open field, and the lone dog back needs a way to slow down the puppy.

When the teams took the field, Pocket’s group entered wearing their cute Puppy Bowl shirts, and Team Ruff, lead by River, wearing black uniforms, and howling “Mean machine” in unison. On his way to their sideline Butkus, a team Ruff linebacker stopped to take a dump on the team Fluff sideline, a classic intimidation tactic perfected by Rob Gronkowski. He pooped on the opponent’s sideline for three straight Super Bowls. He went unpunished because no one could prove that Gronk wasn’t just confused about what a toilet was.

Team Fluff was not prepared for River’s defensive strategy of stuff and hump; if Pocket’s offense wasn’t cut off before they could advance the ball, they were getting caught from behind and humped. When Team Ruff was on offense, five pugs ran in front of the ball carrier, clearing out Team Fluff’s defenders. By halftime, Team Ruff was up by five touchdowns.

Pocket knew she needed to make some changes to gain the upper hand. She made a phone call, and just before the second half started, her secret weapon arrived, Chunky Monkey, a chow Irish Red mix, who was twice as large as the other pups, joined Team Pocket.

Chunky got the ball first. River’s squad could neither catch him nor hump him, and he quickly scored. When Team Ruff had the ball, and they were running downfield, blocking every dog in their path, Chunky laid down, impeding forward progress. He was too big to run around; the exhausted Team Ruff soon lost the ball.

On the sidelines, River was furious. Her well-coached machine could not stop Chunky. She needed a plan to get him off the field and hoped her defense would hold until her idea came to fruition.

Thanks to Chunky’s outstanding play, Team Fluff opened a two-touchdown lead late in the game, when River called timeout and introduced Chunky to his new parents. River had located them, living nearby watching the game, and learned they had fallen for the big dog. River arranged for them to come to the stadium and adopt Chunky. Everyone cheered, thinking that River had done a selfless act by finding a dog on the other team a forever home, but Pocket knew that River’s only reasoning was to win.

Team Ruff scored three quick touchdowns while Chunky celebrated with his new parents. There were less than ten seconds left in the game, and River’s squad was up by five points. Team Fluff needed a touchdown, but half Pocket’s team was napping. To fill out, her team she would have to play or forfeit.

Pocket took the ball at the goal line with the Ruffs surrounding her. She began to run forward and sneaked under her opponent’s legs until she was in the clear. It looked like Pocket would score the game-winning touchdown when River ran on the field and bit her tail, keeping her an inch away from the goal line.

The dogs from both sides were cheering on their coaches, but after a half-hour of the sisters fighting over the last inch of the playing field, the teams got tired and went to sleep.

If you walk past the stadium, you will still see Pocket and River, fighting over that one inch of ground, both refusing to concede. They may be there until next year’s game.