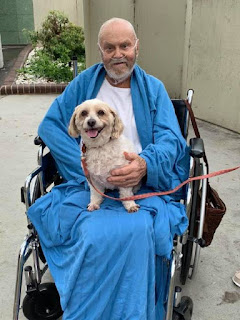 Everyone who has lost a soul to the Bridge wishes they had one more visit with their missing loved one.  A dog named Tilly may have got that wish this week.

Colin Woodford, an 80-year-old man who lived alone with Tilly, became separated from her when he was diagnosed with a severe lung infection and soon was fighting for his life in the local hospital’s intensive care unit.  He was not afraid of dying but was worried he would never see his beloved dog again.

Tilly was being cared for by Colin’s niece Amber, his closest family member.  She visited Colin every day.  It was hard for her to determine who was more depressed by the separation, her uncle or the dog.

Amber contacted the hospital with a proposition:  Her uncle was suffering from severe depression, which hindered his recovery. The only remedy for his condition was to see Tilly.  Amber convinced the hospital staff to allow the visit.

Amber thought that the wish being granted was a miracle.  Of course, when one occurs, we must look to the angels, who are the miracles’ keepers.

Tilly sent hundreds of prayers to us, asking that she be allowed to see her dad.  I waited until our weekly judge meeting to decide how to proceed. We agreed that angel visits were needed.  Instead of sending a random angel, I suggested we appoint the dogs who belonged to the hospital administrators and passed to the Bridge to persuade their parents to allow Tilly’s visit.

Thankfully, the people who ran the hospital could not say no to their dogs, even in angel form, and they approved the visit.  When I went into Tilly’s dreams to tell her the visit was approved, she barked so loudly she woke herself up.

Unlike Tilly, Colin had no idea of the dog’s visit or why, the next morning, he was put into a wheelchair, removed from his room, and taken down to the lobby.  He was sick, tired, and depressed.  Colin just wanted to be left alone.  But, that attitude changed when he arrived in the lobby.

Collin got to the lobby, where he saw Amber holding a leash with Tilly at the end.  The woman released her grip on the lead, and Tilly broke free, then jumped on Collin’s lap, who greeted the dog with tears in the eyes.

It touched the hearts of Amber and the workers who gathered to see the reunion.  For a short amount of time, as Collin and Tilly snuggled together, all the world’s problems were gone. What mattered was the love between man and dog.

They visited for over a half-hour.  They never shared a word, but lots of licks and kisses.  Before they parted, Collin promised that they would be together again.  The visit had given Collin the strength to fight and get better.

We, angels, hope that word of how Tilly helped Collin spreads across the world.  There are all sorts of illnesses across the globe and medications to fight them, but nothing heals like a dog’s love.