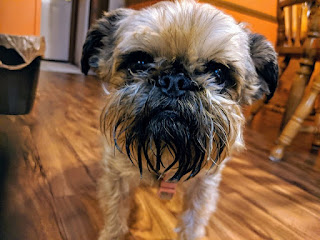 When the weather warms, she does go on walks but mostly for the sniffing:  It is nourishment for the nose.  If food were out of the equation, she would be as active as a log.

Sometimes when she's lying down, River is thinking about getting food and looking for tasty ideas on her iPaw.  Her favorite site is Foodterrest, where dogs post pictures of their meals or share ideas on how to get more. That is where River Song found the post seeking dog debaters for a tournament at the end of January.  The winner would receive a lifetime of kibble.

That night under the covers, River told Pocket of her debating intentions. Pocket was skeptical of the idea. River insisted she could win any argument by merely staring at her opponent until their will crumbled like a cheap Milk-Bone.  Pocket suggested River may need to do more than stare and agreed to do debate prep with her the next day.

Pocket discovered the topic would be cats: friend or foe.  She wanted to give River an intelligent opponent to help her when the actual debate began, so she studied the subject all morning. Pocket took the position that cats are our friends.  When they were alone, Pocket started the discussion by giving a well researched and thoughtful argument that cats and pups should be best friends.  When she was finished, she nodded to her sister to begin.

River stood up, smoothed out her notes, stood high, and exclaimed: “Pocket, you ignorant slut. You have made a fool of yourself, and I fart in your general direction.”  Then River turned and glared at Pocket.

“River, that can’t be your argument,” Pocket advised.  “You need to use facts, reason, and be persuasive, not just insult your opponent and stare at them.” River continued to glare.  “You need to stop that.”  The Griffie persisted.  “River, you are freaking me out.”  She glared harder.  “Alright, you win!” and Pocket ran off while  River smiled slyly.

River convinced Pocket to go with her to the debate for moral support.  When they arrived, one of the field of 16 had dropped out.  River announced that Pocket was an excellent debater and said she could join the competition.

Both of them won their rounds, Pocket through diligent preparation, and River through intimidation.  At the end of the competition, they were the only debaters left.  River was confident she would win but knew that she would still reap the rewards that Pocket earned if somehow she lost.

The debate began.  Pocket presented her meticulously researched argument.  Then it was River’s turn.  She relied on her usual tactics:  calling Pocket an ignorant slut, farting in her general direction, then glaring at her, only to see her face reflected back.  Scared by her face, River ran off the podium and conceded the victory to her sister.

River was proud that her glare was so intense she could scare herself and frustrated that simple Pocket had tricked her.  She was mostly looking forward to eating forever, now that they had a lifetime supply of kibble.

The next morning, when breakfast was served, there was no extra food.  When they were done eating, River asked Pocket where she was keeping the kibble and was stunned to learn that her sister had donated it all to a shelter.  “I don’t eat that much,” Pocket said.  “It would only go to waste.”

“Waste?  Have you met me?” an exasperated River yelled.

Pocket curled into a ball and prepared to sleep. “I guess you should have prepared for the debates better,” she advised.

River gave Pocket an ear bite, stalked to her bed, laid down, and sighed to herself:  “Drats!  Foiled again.