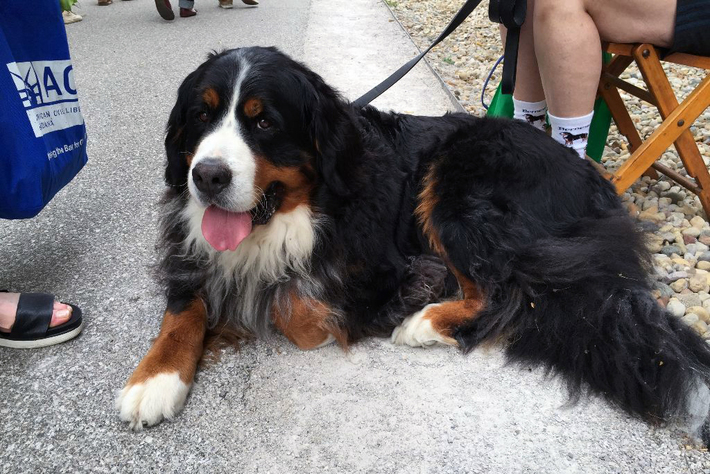 I am used to getting soaking wet when I give the angel oath.  The rain comes from clouds filled with tears of those mourning the lost soul.  When Angel, a Bernese Mountain Dog, went to the Bridge, more tears were shed than at any angel inauguration I could remember.  When I got to know this particular dog, I learned why.

Angel lived her mortal life in Monroe County, Indiana.  She spent her formidable years in a shelter and did not get adopted until she was four.  Little did the shelter workers know this adoption would bring joy to so many people.

Angel was adopted by a farmer named Steven Coppersmith.    They quickly became inseparable.  Angel loved going to the farmer’s market, where she got lots of attention and food.  It was there that they met Rebecca Warren, executive director of the Monroe County Humane Association.

Impressed by Angel’s sweet nature and caring personality, Rebecca asked Steven if he had ever considered training Angel to be a therapy dog.

The therapy dog training center that Rebecca was affiliated with aimed to improve mental, physical, emotional, and cognitive health through interaction with animals.  Steven was intrigued with the idea and discussed it with his wife Karin, who agreed they would try it, with Karin attending the program with him.  While Angel was born with many of the attributes she would need, the training taught her a new skill set.

One of the essential rules Angel learned was to leave it.  She was used to scoffing anything that fell on the floor, but if she went to work in a nursing home and a pill was dropped, which could be harmful to her, she would have to learn to ignore it.  “Leave it” is one of the most important commands for a therapy dog.

When Angel graduated, she became a very popular therapy dog.  She visited public schools, college students studying for finals, nursing home residents, and libraries, where she acted as an inspiration for those who had trouble reading.  A dog was needed for more severe duties, such as working with dementia patients or at the child advocacy board; she comforted children before undergoing a forensic interview.

Many of the souls Angel comforted remarked that she had a natural gift for such duties, and she had the valuable skill of looking into people’s souls.

Sometimes Angel’s skills were supernatural.  During one of her trips to the library, a woman collapsed and went into shock.  A security guard summoned Angel, who pawed and licked the woman.  A minute later, the injured lady was sitting up, having recovered.

When Angel was summoned to the Bridge to be a spirit who advises other therapy dogs, she left her parents and the entire community heartbroken.  Angel’s parents received emails, texts, cards, and flowers from members of the community.  They knew their neighbors loved Angel, but the outpouring of love still amazed them.

Now, Angel spends her day visiting those souls who she had comforted before they passed to the Bridge; watching over her family, and being on call to help any therapy dog who is stumped on how to aid their patients.

Therapy dogs are like jedi knights, when they got struck down they come back twice as strong as before.