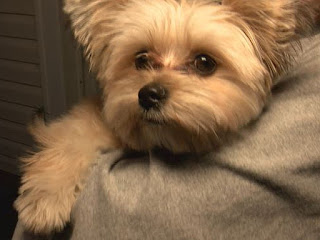 I have accomplished a lot in my life, but I have never got to ride a tornado.

I think it is because I calculated the possibility of a Yorkie surviving one, and I did not like the odds.  But that was before I met Penny.

Penny and her mom were huddled in bed together in their home as a tornado ripped towards their neighborhood.  Penny’s mom continued to tell her it would be okay, even if she didn’t believe it. Suddenly, Penny stood straight up. She was so attentive her mom thought there was an intruder in the house.  Then she heard the sound of a freight train chugging to their home.

Suddenly, the tornado turned toward Penny and her mom’s abode.  The mirrors flew off the walls, and then the entire structure was lifted.  Penny’s mom adored her, but there was a soul in the house she loved more.  Her son was sleeping in an adjourning room.  Penny’s mom hurried to protect her son, leaving the Yorkie alone.

The back bedroom wall was ripped from the house, and everything in it, including Penny, was sucked out of the back of the house.  Memory, her mom, turned back and witnessed Penny, caught up in the sheets and flying into the storm.

Memory was sure that Penny had been killed, but she could not show any emotion, knowing it would further traumatize her already frightened son if she told him of Penny’s fate.  Memory promised her son that the little dog would be okay because animals knew how to survive storms.  She would deal with Penny’s passing later.

As you have already surmised, Penny was blown to Rainbow Bridge.  I was waiting to swear her in when she came by on the tornado.  We brought a ladder to help her down, but she refused to use it.  She was yelling like a cowboy riding a bull.   Penny said she wasn’t ready to cross over yet, at least not until the fun ride stopped.

Then the tornado turned back to the mortal world.  I sat down to wait.  I knew Penny would return, but this time dragging her broken body out of the River of Life.  Her being swept to the Bridge was mercy, which she did not take advantage of, and would surely lead to a painful passing.

Penny rode the tornado as it gradually lost strength.  It slowed down and lessened.  Before the tornado lifted from the ground, Penny slid down like it was a water slide.   She landed on the ground and used her Yorkie skills to sniff her way home.

She was in for a shock when she arrived home.  The bedroom wall was gone.  She ran to the bouse and sniffed around the foundation, hoping to find a whiff of her family when she heard her mom scream out her name and come running to her. Penny’s family was stunned she arrived, and gave her one million kisses.  The only sign that Penny had been through an ordeal was a bit of grass on her forehead.

During these difficult times when tragedies are piling up like firewood outside a mountain cabin in January, it is good to have a feel-good story, and nothing makes people feel better than a flying Yorkie.