It became a Lucky day at the Bridge. 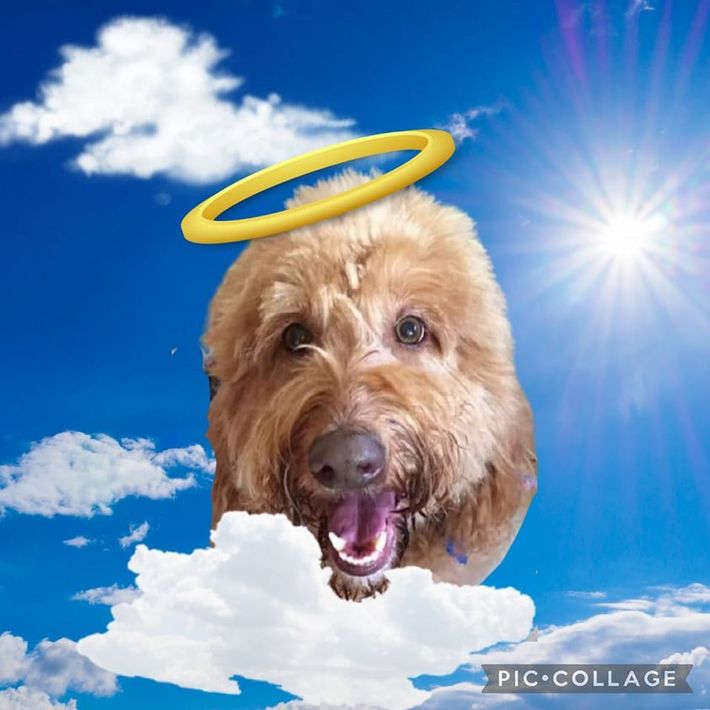 Everything expires on the mortal side, even Luck.

This week it ran out for one of the most fortunate and best-loved dogs I know, Mama Julie's dear heartmate, the beautiful Lucky, who lived up to his name, by making his mom feel like the luckiest lady in the world that she had been blessed with him in her life.

Cancer is like a killer in a horror film. It sneaks up on you, and the disease quickly moves when it decides to attack. I did not last a day when they diagnosed me, and Lucky had less than a week. Please don't think he lost the battle; Lucky took the disease with him when he departed for the Bridge, and before the pup crossed it, he smashed the dreaded disease to bits on the rocks.

After he had an episode, a kindly vet, who makes house calls, a vital and lost aspect of veterinary work, came to Lucky's home. When I got sick and was placed on oxygen, my parents hoped I had pneumonia. Lucky's mom and dad knew their precious boy was very sick and wished it was a blood disorder, but like mine, they were dissuaded from that hope by the doctors, who announced the cancer diagnosis.

Lucky signaled to his parents that he didn't want to go. Before the vet visit, Lucky prayed for more heartbeats. Because he is such a good boy and had lived an exemplary life, we presented him with more of them, so he had more time with his parents, even though it wouldn't be enough. A whole life is not long enough when you are cherished.

The new heartbeats were like a shot of adrenaline for Lucky. His vitals normalized, and he seemed to have his lovable spunk. We were all hoping the rally would last weeks, but heartbeats were not enough, and the rest of Lucky's body was failing. He passed over less than a week after his diagnosis.

His parents knew that Lucky's song was ending, and they surrounded him with love, so he could take it with him when he passed over. He peacefully took his last breath and heard the sobs of his parents as his soul lifted from his body, floated to the nearest waterway until he came to the River of Life, where he landed and crossed over. He met all his family who preceded him and friends he lost and then sat and watched the tears of all who loved him fall from the dark clouds that followed him.

After his welcoming dinner, he said he was going to be busy. He will spend a lot of time trying to comfort his parents in their dreams, ghost visit, and hopefully find a small creature who isn't afraid of winter and willing to loan him a body to appear and remind his parents of his devotion to them.

But, he also had a surprising duty. "I have to build a garage," he said. That is when we realized that one of the social network world's most revered dogs would soon be arriving. We all pitched in to help to make sure it would be the best garage anyone has seen at the Bridge.

Posted by Foley Monster, Pocket and River Song at 11:18 PM