Matilda Waltzes Into a New Life 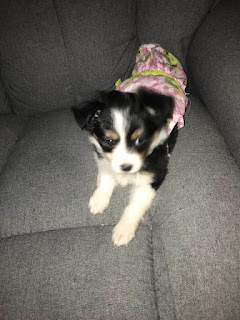 \ Teddy Bond, world-famous angel-secret angel, who prefers the water in his bowl to be shaken, not stirred, is always prepared, which has brought him great success in his chosen field.

He was the first to know his sister Gracie was coming to the Bridge, and on her crossing day, he had her room decorated precisely how she wanted.  There was one other matter Teddy had been planning, finding a new dog for his mom.

He had met Matilda, an adorable puppy when she was in pre-birth classes.  Out of the hundreds of dogs that were preparing to be born, she was the one he knew would help rebuild his mommy's heart after Gracie passed over.

It would have been easy for Tommy to go into his mom's dreams and tell her where to find Matilda as he did with Gracie.   But, it would help Gracie if she thought she was the one who found the new pup.  The following day, when Gracie awoke, Teddy told his sister they had to find the right puppy for their mom.  Matilda was living with her birth parents and ready to go to her forever home by this time.  The night before, Teddy had visited Matilda and told her she would have to audition one more time for Gracie, but he would make sure the little puppy became their mom's next heart dog.

Gracie took her work seriously.  She spent the day writing out questions to determine who would be the right dog, more than Teddy, who thought finding the right pup was more of a gut thing than an intellectual one.  Teddy was impressed with his sister's attention to detail and worried Matilda was not prepared to answer them correctly.

Teddy stood behind Gracie as she asked Matilda her questions.  When Matilda was stumped, Teddy would mouth the answer, but all Matilda understood was "Arf."  Luckily Teddy picked the right pup because Gracie also selected Matlida.  Teddy sighed in relief.

Just as Teddy had done a decade before, Gracie went into her mom's dreams and whispered to her where she could find Matilda.  Luckily, their mom's mind was open to a new dog, and she listened.  Within a day, Lucky Matilda was in her forever home, rebuilding their mom's heart, and Gracie, thinking that she had made it all come to be, was not worried about being an angel.  She had passed her first test.

Teddy made himself a dish of water, shaken, not stirred, and sat on his deck watching the sun go down, happy that another plan had ideally come together.

Posted by Foley Monster, Pocket and River Song at 11:18 PM