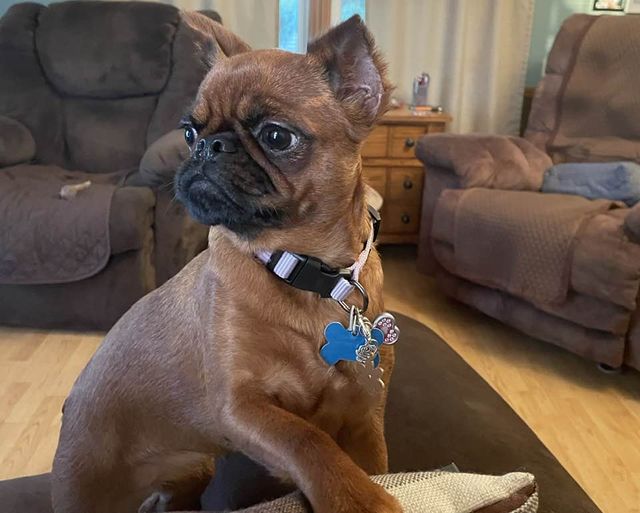 I haven’t reported in the past couple of weeks because there hasn’t been anything happening, which is how I like it. But, last Sunday, outsiders invaded my quiet, peaceful home, including tiny people who scared the Snausage out of me.

There were two adults younger than my parents, a boy almost as tall as my dad, and two girls who looked and dressed alike. I was sure I had gone through the looking glass,

They gave my Mom hugs and put their hands in front of me so I could sniff them, and they professionally gave me scratches, and I could smell another dog on their fingers. When they sat down, I hid behind my mom.

River Song floated down as a ghost and told me not to be afraid. The people were my human brother, his wife, and their three children, two of whom were twins. They were up from Thanksgiving in Florida. I didn’t think this could be true. I was from Florida, and I had never seen them.

I asked River why the two girls mysteriously looked alike, with their long dark hair and big brown eyes. She said they were twins, two humans who looked exactly alike, and it was the devil’s magic if you ask me.

River told me I was in no danger and that the little girl, and her copy, were lovely, friendly, and just wanted to be my friend. When River flew away, I moved up to the end of the recliner and let them rub me some more. By the time they left, I was already missing them. I wished we had gone back to Florida with them. I would never leave my parents, but I feel less loyal to the house or the cold, rainy state where we live.

My parents went out to eat with the little visitors on Wednesday, leaving me at home, which I did not like because I usually go with them, but they ate at Mussolini Burgers, and I couldn’t go because fascists hate dogs.

The next day I left again when they went to my human sister’s house. It was the first time they had seen my cousin Mr. Neely, a cute little Shih Tzu, and he was overjoyed to see them. At least someone was. My parents made up for it when they got home. My Mommy fed me before they left, then forgot when she got home and started preparing my food before realizing her mistakes, so she provided me again.

It was a Thanksgiving Miracle.

September 23, 2019
Are you a trip hazard?  Have your parents ever tripped over you?  How often?  Did anyone get injured
33 comments
Read more