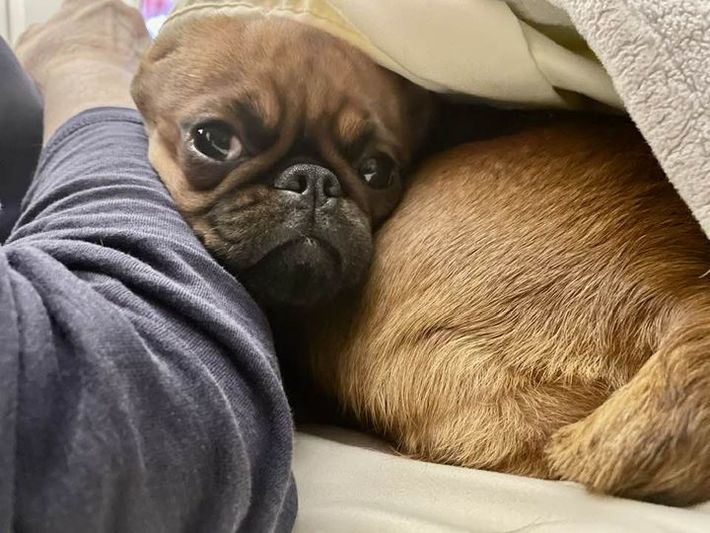 This was the week my parents lost their minds.

After a busy Thanksgiving week on Monday, I thought the next would be quiet.

Then a matter most unnatural occurred. My Dad went into my buggy shed and came out with a tree top, and I could not figure out why or what he did with the rest of it.

He went into the shed again and brought out two more tree pieces. Apparently, he has been running a tree-growing operation from my shed. I hope my buggy won't be taken as evidence when the tree inspectors arrive and shut down the illegal activity.

My mom sat in the living room. She did not seem surprised when he brought in a tree section, then shoved it into the stand. I could tell immediately it was the wrong piece and tried to bark at my parents, but they responded by telling me to be quiet. They couldn't get the tree part to fit and "light up" (great, a smoking tree.) My Dad went through the three stages of frustration: Yelling HBO words, blaming the tree, and then accepting that he was an idiot. He put the right piece in, and little lights suddenly were aglow.

I had hoped this was the end of their foolishness, but two more sections were brought in, and soon the top was scraping the ceiling. I went over, expecting to smell the forest, but I only got the faint scent of a Lowe's Chrismas section manager's bad cologne.

Once the top of the tree was attached, the day was over. But wait, there was more. Daddy brought a big Tupperware container into the house, and Mommy began decorating the tree. Talk about overkill.

I looked outside. A strange green vine had attached itself to our railing. My Dad saw it but didn't do anything to cut it down. I hope it doesn't continue to grow and damage my water dish.

The final decoration was a tiny village located and lit up (what is it with these people and lights?) When my Dad was done, I checked out the town. It seemed nice. There was also a manager set up on another low shelf. The baby looked so cute, and I liked it. The baby got stuck on my tongue and inadvertently went into my mouth.

"Ruby, put that down," my Daddy yelled. My mom asked what was wrong, and he mentioned this Jesus fellow, who apparently is a big deal, and Mommy tried to open my mouth, causing me to swallow the little baby.

My parents were outraged that I swallowed Jesus, but seconds later, he rose right up in my throat and out of my mouth because rising up is his thing.

I don't know how much longer this stuff will be up, but I don't like it.

Next week I will tell you what happens when a human hasn't had a puppy for several years. They are, "the puppy won't bother the tree."

I never let a challenge pass me by.

But that's for another day.

September 23, 2019
Are you a trip hazard?  Have your parents ever tripped over you?  How often?  Did anyone get injured
33 comments
Read more