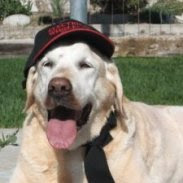 Yesterday we had a very important birthday here at Rainbow Bridge.  Tanner Bub, the dog that brought so many of us together, and for whom we named the Tanner Brigade, celebrated what I believe was his 19th birthday and his sixth at Rainbow Bridge.

Every year Tanner’s party grows because more of his friends join us on the immortal side of the River. Sitting next to him at the head of the table was his wife, the beautiful Sophie Bub.  Before we began eating we raised a glass to all the friends who just joined us and all the friends we left behind.

For those of you unfamiliar with Tanner’s tail he was one of my best friends on Doggyspace in 2007.  We were all happy there and then the management began to make some changes including dissolving groups among them Tanner’s Yellow Lab group.  Tanner complained about his group being deleted and he got labeled an agitator.

Shortly after that Tanner got diagnosed with terminal cancer.  His Mom was distraught over the thought of losing her heart dog and she made the mistake of breaking a DS rule by using a human name (this human had caused several of us pups to complain about him) on a post I had made.  The owners of DS banned Tanner from the site.

I sent an e-mail to the owner of DS asking him to let Tanner back on the site.  I must have posted his response 20 times in the past six years and there is no reason to do it again.  But just for fun let’s do it anyway:

““As you know the rules are laid out clear, and we can not allow this bickering to continue, nor slander. It may be unforchunit for her personaly, however she knew she should not have done that before she even posted it, and we can not make exceptions in this case due to the size of the event. Dont expect it to be the last eather, the entire admin/support team are hunting down anyone that was part of the event on bothsides as its a clear break of the community rules. Its sad to see so many adults act like children.”

I have not changed the post to make the communication more ignorant.  There was no need to do that.  I have never been on to suffer a fool graciously, and I told the author how little I appreciated his opinion and his expression of said opinion which got me, like Tanner, banned from the site and lead me to make so many friend in Blogville, and also to find my own site, which I named the Tanner Brigade after the dog whose determination and friendship brought us together.

This year Tanner was quieter than usual, his jovial spirit muted.  Not everyone could tell, but those closest to him could.  Tanner was worried about his Mom:  Aunt Trudee.

Earlier this summer Aunt Trudee got diagnosed with the dreaded C word.  The dreaded C word brought both Tanner and  me to the Bridge,  As much as we miss our parents we don’t want them coming here which was why Tanner was nervous.

His Mom had an operation and the doctor said he “got all of it” and there were “good margins” and all that doctor stuff but she is still going to need the chemotherapy to reduce the chances of the C returning to 5% and chemotherapy is very hard on a person.

So today, a day after Tanner’s birthday, and on my birthday, we are only asking for prayer for Tanner’s Mom, my Aunt Trudee, that she is able to get through the treatments with as little pain as possible and that the dreaded C never comes back.

That’s not too much to ask on a couple of pups’ birthdays is it?