Twas the Night Before COVID 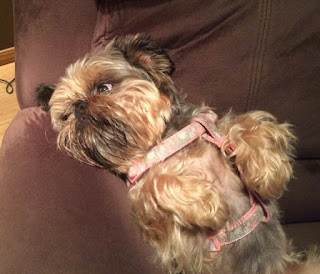 Twas a week after Christmas and all through the house.

The decorations were taken down by an unjolly louse.

The masks were hung by the front door with care.

With hopes that the COVID vaccine would soon be available there.

Two dogs were in bed, River above the covers and Pocket below.

When River thought they heard a tiny hello.

She stepped on Pocket, waking her from her late-night nap.

In the living room, River heard a definite hiss.

And with Pocket jumped down to see what was amiss.

Off to the living room, they made a mad dash.

To sniff around the sofa and out of habit one another's ass.

The room was lit by moonlight reflecting on the snow.

And Pocket worried because the cold weather made her have to go.

Then their sniffing noses made it all clear.

The CORONA Virus on a recliner drinking beer.

That it was the dreaded COVID 19.

More sickening than the Grinch, it hissed and drank its beer.

It rattled off what was becoming increasingly clear:

"On death, on dying, on petulance, on fear.

I am going to rule things well into the new year."

River stepped up to the filthy virus.

And publicly inquired how it could elude us.

'I snuck in on a box of saltines," the Virus said with pride.

“The grocery store said they cleaned it, but they lied."

River knew the virus was a big bag of illness.

Her sleeping parents were nothing but helpless.

"Once I finish my beer, I will infect them all.

His breath was like old fish, and his appearance vile.

His smell so disgusting River knew it would be in her nose for a while.

He was repulsive, smug, and glum.

Even high as a kite, this creature would be no fun.

River knew they had to rid the house of this claptrap.

She turned to Pocket, who was taking another nap.

When Pocket was awake, they hatched a plan.

To give the disgusting virus a lifetime ban

They snuck into the kitchen where the disinfectant lay.

The very tools they would need to win the day.

They came out of the kitchen, blasting the disinfectant spray.

The virus laughed at them and said they would have to do so much more to win the day.

The Covid then blew a breath towards them, so gross.

It's knocked the siding off the house.

The Virus mocked them for trying to beat him with a little can of gas.

Then it remarked:  "Don't forget to tell Dr. Fauci to kiss my ass."

The girls knew they had to stand down and reload.

River took Pocket to the front room and hatched a plan so bold.

They re-emerged with River sitting on a Shop-Vac set to blow.

When she turned it on high, the disinfectant burst out, and the Virus knew it was time to go.

They followed the virus as it slithered in its attempt to flee.

Pocket then covered its trail with her own disinfecting pee

My sisters took a few seconds to celebrate.

They didn't overdo it because the virus was still free to procreate.

Before the virus slumped out of sight.

It remarked, “With me free, you will never sleep a good night.”

Posted by Foley Monster, Pocket and River Song at 7:31 PM