The Most Ill-Treated Dog in History 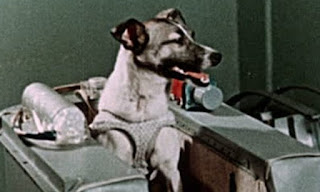 There is a young dog at the Bridge who refuses to go near humans. I decided to find out why. I found him sleeping in DoggySpace Town Square.  I asked if there was anything I could do for him. He replied that he just wanted to be left alone. I should have respected his wishes, but letting things go is not one of my better qualities.  I told him I certainly didn't want to offend him, but I needed to know why he didn’t want to be near humans.  He answered that people had treated him worse than any other dog in history.

I have heard dogs make this claim before.   In each case, we have convinced them to trust humans.  I was determined to do the same for this poor little dog.

First, I needed to find out what the humans had done to this little dog. “I don't want to talk about it,” he barked.   I knew I was a little pain in the butt, but I persisted.

“What's the worst thing they did to you?  I asked.

“I was doing fine living on the streets.  Then I was picked up by the Russian military. They never showed me a bit of affection, although they were always telling me I was a brave dog.  I underwent a lot of tests.  Then I went on amusement rides that were great fun.

“They told me that I was a hero dog, but I didn't know what I had done to earn that title. One day they brought me in front of a huge crowd, and people shouted all sorts of questions to the military men who had snatched me.  I was confused by the process but went along because I was being fed three squares a day, and I did not want that to stop.  I had never eaten so well.

One day they brought him to a bustling place. He noticed off in the distance a big rocket. He wondered if they were going to shoot it into space. It would be marvelous fun to watch. Then they brought him to the base of the rocket. He was put on an elevator with two humans and taken to the very top of the structure. It was a fantastic view. He was brought over to a small capsule located at the top and was put inside of it. He thought it was for safekeeping. Then the door was fastened shut with big bolts. That is when our friend realized he should never have trusted a human.

“The whole structure began to shake, and then suddenly it lifted into the air at a thousand miles an hour, leaving the planet behind.  I was terrified. But on that glorious day in November 1957, I went higher, farther, and faster than any other dog in history.”

The pup imagined the parade he would receive when he landed. He would probably be placed with the finest family in Moscow, who lived in the most beautiful house.  Granted, that's like getting the worst house in Fresno, but still, he was looking forward to it.

After a few orbits of the Earth, he had to pee. There was no way to radio someone. He just had to hold it.  Then he began to paint. He realized it had gotten boiling. He looked around, but there were no windows. He decided to fall asleep and hope to be back on the ground when he awoke.  He was but not on the mortal side.  He was on the grass near Rainbow Bridge.

It had several weeks for him to arrive at the River of Life.  When devising the system of passing on, no one considered what to do if a dog expired in space. It took a long time for the capsule to come close enough to the ocean that his soul could transform into an angel.

When he arrived at the Bridge, there were no humans to greet him, only dogs. They admired him very much and offered to let him live with their families. Even as an angel, he could not trust humans, could never forgive them for not loving him, shooting him into space, and leaving him to die.

He never approached another human at the Bridge and preferred to live alone. When I told him that I hoped I could find a family for him, he scoffed, got up, and left. And that is when I became determined to start looking for a forever home for him.

Humans can be terrible, but if you give them a second chance, they will show you how special they can be even if they did shoot you into space.

Posted by Foley Monster, Pocket and River Song at 7:52 PM