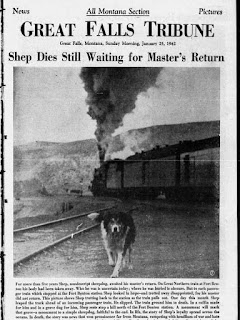 This is a story about love, devotion, persistence, and the only dog to arrive at Rainbow Bridge via train. It was almost 100 years ago in rural Montana where Shep lived with his father. They did everything together:  An unbreakable pair.

One day Shep's dad took ill. With no way to get to a doctor, Shep's dad hoped to ride it out. Unfortunately, the disease proved to be fatal. When neighbors realized they had not seen the old man for a few days, they found him passed away in bed with Shep resting on the dead man's chest.

Shep's dad had lived back east when he was younger and requested that he be buried in the family plot in New Jersey.  Shep followed the men carrying his father in a coffin to the train station.  When Shep was not allowed on the train, he began to cry.  After the train sped away, people tried to corral Shep, but he ran away.

The next day when the train whistle sounded, Shep ran back to the station and waited for his dad to disembark.  When he didn't, a dejected Shep disappeared into the woods behind the train station until the whistle blew again.  When it did, he hurried back and sat on the platform looking for his dad, who was never going to return.  Shep continued his daily trek to the station for years.

Shep's dad tried to help the pup. He visited his best boy in the dog's dreams to explain that he would not be getting off the train. But Shep could not comprehend that his father would no longer be physically with him. That meant no long walks, quiet afternoon fishing, or hours spent playing ball together.

Shep became an unofficial mascot for the train line. Stories of his devotion spread through the country, and people came to the sleepy Montana town to watch Shep wait patiently in vain for his dad to arrive.  People in the station began to feed Shep and put a seldom-used blanket out for him.  They tried to bring him inside during the worst weather, but Shep had vowed never to step inside again without his dad.

Shep grew older and developed vision and hearing problems. This is not good for a dog who spends time at a train station—more than once, people had to pull him from the tracks before the train hit him.

Finally, one day the train pulled into the station, and his father was on it. He called for Shep and told him that they could be together now. Shep's tail wagged furiously, and he ran onto the train. To the bystanders, they saw something different:  Shep slip and fall underneath an oncoming train. The dog was mourned like he was one of Montana's great citizens.

Later that day, a train appeared on the other side of the river. It turned, squeezed over Rainbow Bridge, and chugged up the steep grade to the spot where he was sworn in.  Shep did not stay at the Bridge for long. He only had his dad, and his dad only had him. There was no one else for them to wait for, so together, they went to the land of Happily Ever After.

The word is that Shep and his dad still visit Rainbow Bridge from time to time, and you can see them walking on trails along the mountainside. In some parts of Montana, folks swear that when the moon is holding water and the planets are aligned that Shep and his dad can be seen riding the train into the station.

Shep is a symbol of devotion for all of us dogs. We try to live up to his example. Shep didn't invent devotion, but he did perfect it.