Sweet Pocket Offers Her Crawl Space to a Lost Turkey 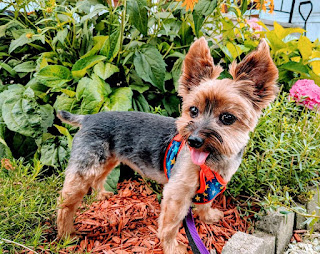 Somehow, despite living with two hard-edged dogs like River and me, Pocket is still a sweet pup, sometimes to her detriment.

Last week Pocket was outside doing a quick bit of business to make sure her bladder was empty, or at least as empty as a leaky Yorkie can be, when she came across a lone turkey in our back garden.

Having turkeys in our yard is nothing new.  A flock of them usually comes by in the morning.  They walk single file behind their leader; something dogs could learn from, and keep pecking the ground until they find sufficient provisions.

The smallest turkey must have taken longer than his siblings to peck. He became lost in concentration. The pack returned to their nest in nearby words leaving the little bird homeless alone.

When my sisters went outside, the bird was sitting by the rose bush’s skeletal remains, shivering.  River did as I would have. She attacked.  Pocket stopped her sister, flashing her few teeth at her.  "We should let him stay in the crawl space until his family returns," Pocket suggested

"Are you daft?" River asked.  " Do you think Mommy is going to let you keep a turkey under the house?"

"She doesn't have to know."

"Of course she will know," River responded, "she knows everything. And this fowl smells quite foul.  Mommy has the nose of a basset hound on the hunt."

“It will only be for a night.  Mommy may smell something, but after dark, she's not looking under the house.  When the turkeys come by in the morning, this fella can just fall in behind and march home.”

River was about to disagree when she grinned and told Pocket she thought it was a capital idea.  She even helped Pocket slip the slat under the house to the side to allow the turkey, who informed them his name was Aristophanes, to gain access under the house. Ugly Joan, the feral cat who likes to sleep below the steps, was absent. She only returned to her lair every two or three days, and since the weather was calm, they hoped she would not return for the night.   Pocket showed him some insulation that could be used for a nest and suggested he stay by the heater to keep warm.  When they left, Aristophanes was contentedly building his nest.

After an hour of Aristophanes inhabiting the crawl space, my parents began craving roasted turkey.  There were no other signs that a turkey was in the crawl until just before bedtime when Ugly Joan returned, and there was a great deal of pecking and clawing until Aristophanes prevailed because peck beats claw as set forth as a rule in the game pack claw bite.  Claw beats bite; bite beats peck; peck beats claw.

In the middle of the night Pocket, noticed River was not in bed. She went into the living room and saw the grate that led to the crawl space was open. She crawled down until she was under the house and found River and ugly Joan, usually the bitterest of enemies plucking and basting Aristophanes. Pocket barked at both of them to leave the turkey alone.  “It's not our fault,”  River complained. “It smells like a freaking Boston Market here.  It’s too tempting.”

When Pocket checked in the morning, Aristophanes had rejoined his flock. All that was left was a bright shiny egg. “I don't think Aristophanes was his butch as he thought,” Pocket told River.

They returned to the crawl space, having decided between eggs benedict and a poached egg, but the egg was gone.  They saw Ugly Joan sitting uncomfortably.  She was the mother of numerous litters and had adopted the egg, and she planned to sit on it until it was hatched.

That baby turkey was due for a heck of a surprise.