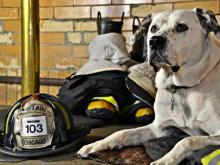 Today we prepared for the arrival of a famous dog.  Pups who had belonged to fire departments on the mortal side lined the path from Rainbow Bridge to Hobo’s Landing because Freckles from Engine 103 in Chicago would be arriving at his forever home soon.

Freckles was a local celebrity.  He took daily walks around the city’s western loop and spent hours on a Yoga mat outside the firehouse, where he greeted visitors.  He was the inspiration for the dog on Chicago Fire.

When Freckles grew bored of sitting in front of the station, he would sniff around the neighborhood, walking into shops, and being greeted like he was a beloved human.  Freckles was featured on a popular Facebook page, and his admirers flocked from around the country to greet him.

When he wasn’t working, Freckles spent his time living with his caretaker Michelle.  She was so devoted to the Dalmation-pit bull mix that he was the “best being” in her wedding.  He dressed in a bow tie and posed for dozens of pictures.

Freckles adored people, and they loved him back.  Even if they didn’t know that Freckles was famous, people were drawn to him.

He first started working at Engine 103 in August of 2004 after the house lost their dog.  A neighbor donated him.  After a trial run, Freckles was unanimously voted in as a squad member and subsequently became a neighborhood draw.

Freckles knew how to play to a crowd.  Both tour groups, and students on field trips, would come to the station to meet the dog.  When he saw a bus stop near the firehouse, he ran with a wagging tail to greet the visitors and provide delight.

Freckles shift ended after 17 long years of firehouse duty.  The entire community remembered him fondly. They had thought of him as mayor of their neighborhood.  The western loop would never be the same.

And neither would Rainbow Bridge.  Freckles was a well-admired hero and inspiration for dogs everywhere.  When he crossed the Bridge, the fire dogs began cheering him and did so until he was sworn in as a new angel.

Being driven by a dalmatian, a fire truck drove on to the landing, and the spotted dog blew on the horn and waved for Freckles to get on board.  When he did, he was given a captain’s jacket, one of the highest ranks in the Doggyspace fire department, and was driven to his new station, which he will rule over for eternity.

We are all sleeping better at Doggspace Village because we know that the best dog fire captain who ever lived is on duty.  There are never fires here,  but there are still emergencies, mostly centered around silly cats who climb trees and can’t get back down and need to be saved by a dalmatian in a bucket.

Regardless of our threat level is low, our comfort level is high because sweet, smart, brave, and loving Captain Freckles is on duty now and forever.

Posted by Foley Monster, Pocket and River Song at 8:37 PM