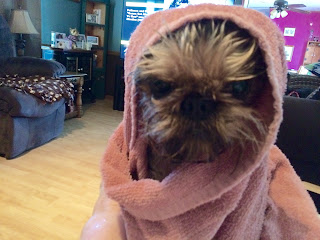 Despite having spent several winters exposed to the cold temperatures which invade New England from November to mid-March, River remains a Florida girl at heart.  She hates the cold more than she hates when Pocket tries to sleeping near the top of the bed.

Humans don't appreciate what we have to go through just to pee in the morning during cold weather.  We are removed from under the covers where we have burrowed to protect ourselves from the cold.  We are leashed and brought outside without having a chance to wipe the sleep from our eyes.   When outdoors, our paws feel like shoes made of ice, the ground is cold and unforgiving, and we are expected to pee and poop exposed to these horrible elements. I know in the past, humans did not have indoor plumbing. Instead of going out at night in the cold to the outhouse to pee and evacuate, they use what was charmingly called a chamber pot.  Where are the chamber pots for dogs?  Write that down.  It's a million-dollar idea.

River is an avarice reader.  When she is on her I-paw, she covers her action by making it look like she is chewing her foot. Last week, she found a link about a heat demon called Cruiz. He promised to end the cold for good.  River is a compulsive soul, and she agreed to summons the being without reading the reviews of his work—big mistake.

The demon arose in our back yard.  He immediately thawed the ground and made it ten degrees warmer.  The crawl space under the house was getting crowded, so River told Demon Cruize he could live in the shed. River hoped no one noticed when the window steamed up. She bragged to Pocket that she had solved the cold issue forever.

The temperature rose by ten degrees each day. When it was in the 40s, 50s, and 60s, people remarked what beautiful weather it was for January. But when it climbed over 80, they became alarmed that something was wrong, mostly since the warm weather was isolated to one neighborhood in a Massachusetts town. The Gods noticed something had gone crazy in my area, traced it to River Song, then tasked me to send the heat demon back to the depths of hell where he belonged.  (There is really no hell. It is just a spot in Central Alabama where the living is particularly hard, and the demons are kept until they change their ways.)

Since this was bound to be an epic struggle, the Gods allowed me to return to my house in mortal form.  Demons are notoriously lazy about shutting doors behind them.  I pawed open the shed entrance and found the monster sleeping by the lawnmower.  I ordered him to be gone from this shed because it was free of demons.

He stood, looked down, smiled at my small size, then kicked me out of the shed with his fiery foot.  I was not deterred.  I marched back inside and got blasted by his fire breath. Deposing of this demon was going to be more challenging than I anticipated.

I made two more attempts to retake the shed, but Cruiz continued to bombard me with fire.  I could not take him by using conventional methods.  I had to rely on a dog’s strength.  Then I realized the perfect thing to do.

I backed into the shed, waited for Cruiz to throw a firebomb at me, then farted.  The fire reversed course consuming the demon and causing him to retreat to central Alabama where he could not cause trouble for my family, town, or even my stubborn sister.

When I got back to the Bridge, I was treated like a hero by everyone, on both sides, except River Song, who blames me for the cold mornings.  Hopefully, in the hot summer, she won’t be contacting a cold demon.  They can protect themselves from a good fart.

Posted by Foley Monster, Pocket and River Song at 9:02 PM