Foley Meets Freddy, the World's Largest Dog, When He Arrives at the Bridge 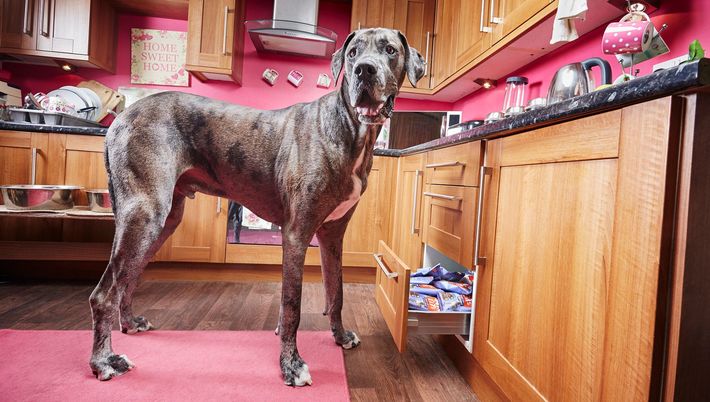 When I got the message that I was to give the angel oath to a dog named Freddy, I did not think there would be anything special about the encounter.  When I reached Hobo’s Landing, I was surprised that there were so many angels waiting for him.  Was there something about this dog that I was unaware of?

When I saw the newest angel climbing out of the River of Life, I was sure there must be a mistake.  Someone had sent a horse to Doggyspace.  This was going to take a lot of paperwork to fix.  I considered letting him stay with us.  He could give us rides.

When he came closer, I saw that he wasn’t a horse, but a giant dog, the biggest I had ever encountered.   His name is Freddie, a Great Dane who stands seven foot five while on his hind legs, the largest dog in the mortal world during his time.  He would make us unbeatable at basketball.

He bounded up the steps and stopped by my podium.  He was sitting, and I was standing.  I was barely higher than his ankle.  He opened his mouth to say hello, and I realized he could swallow me with little difficulty.  Rarely had I been intimidated by an angel.

During the ceremony, I could tell he was a sweet and gentle giant.  He had multitudes of admirers who had arrived to see him, and he made sure to greet them with a long butt sniff.  I admired him. He had a nifty set of lungs.

I was putting away my swearing-in book when I felt the giant standing next to me.  He told me that he had come from a Great Danes family, both from the litter and his forever home.  He had started as the runt, but he soon became larger than all of his mates and kept growing.

I soon learned, despite the difference in our size, that we had a lot in common.  We were both our moms' heart dogs.  We became well-known thanks to social media.  And we returned the love we received ten-fold.

The next day we visited the Town Square together.  I must admit we drew some stares. Hattie, sporting a lovely sundress, inquired if she could ride Freddy.  I would dismiss the idea as being rude when Freddy said he would be happy to oblige. He gave one to Hattie, and after that, several rides to our friends. I must admit I was getting jealous until he sat down and offered me one. It felt like a conquering general riding her mighty steed.

That night we went to dinner together.  I had a small plate of chicken.  Freddy ate half a cow.  I immediately regretted saying I would pay.  But Freddy is such an outstanding company I didn't mind.

I knew Freddie was missing his mom terribly, and I was happy to show him some of my shortcuts to visit her.   When he's not providing comfort to his mom, we can be found at the square playing together and learning the trials and tribulations of both small and big dogs.  Some angels look at us curiously, a mismatched set of friends.  They ask me how we can maintain a friendship, and I tell them we celebrate our differences as much as we do what we have in common.

If I only paid attention to dogs like me, I'd never make any friends or learn anything new.