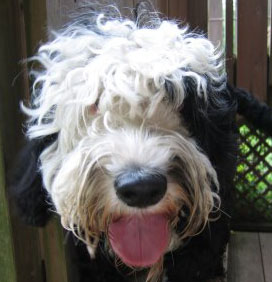 Last week, I decided to pay a visit to my friends from the Portuguese water Dog blog. Lola, Fudge, Sebastian, Noah, Tess, and their siblings live in a beautiful villa located on the river banks.  I love spending long afternoons with them, watching the fish jump and the birds dive into the water. But on this day, I saw something that made my heart drop. The Villa was expanding.

That could only mean one thing. A new member of their pack was coming to the Bridge.

While I didn't know which member of the pack was due at the Bridge, I had a good clue.  Norma Jean had been keeping the dark Angels who claim souls for the Bridge at bay for years.  She had more medical issues than ten dogs combined. One side of her face was paralyzed, and the ear and eye on that side had stopped working.  She had leukemia.  She also had a lung disorder.  It was terrific that Norma Jean had not come to the Bridge sooner. But Norma Jean is a fantastic dog.

The problem with fighting the angels to stay with your parents for so long is that it angers the demons whose job is to collect your soul.  They aim to make the transition to the immortal world as painful as possible. That is why they came for Norma Jean on Christmas.

In the weeks leading up to the blessed holiday Norma had been vomiting. It was not an uncommon occurrence, because she had a sour stomach and possible liver disease.  But the regurgitation happened more often with less time in between. Frustrated that nothing she used helped Norma Jean, her mom took her to the vet on Christmas Eve, was prescribed medications to keep her from vomiting, and was advised to lessen other prescriptions so that Norma Jean's tummy could settle.  Christmas came on a Friday this year which meant a three-day stretch where Norma Jean's regular vet was closed.  Norma Jean's situation did not improve, and a Christmas miracle was not granted.  When Norma Jean's regular vet reopened her parents brought her to get a shot to take away her pain and misery and have it all transferred to her parents as Norma Jean shrugged off her mortal coil.

The more sibling Angels you have the greater the celebration when you are are reud with them at the Bridge.  You can only imagine the party that occurred when Norma Jean arrived.  Between being greeted with howling by her clan, running in the hills with them for hours, and the fabulous welcome home dinner her arrival was one of the most memorable of the year.

No parent gets used to the tragedy of losing a dog no matter how many times they go through it.  Every dog's passing is a new journey through grief's dark and silent woods. Just because you know the way out of one doesn't mean you'll find your way out of the next.  Everyone needs help finding their way out.  The Portuguese Water angels will be bright lights showing their parents the way from grief to acceptance and then to a place where memories bring smiles and not pain.

The parents of the Portuguese Water Dogs and their kin still preside over a multiple dog family.   That means there will inevitably be more pups passing to the Bridge and tears shed.   But maybe someday they will have so many angels that they'll walk through the Woods of Grief will be like a summer stroll on a brightly lit day.

The parents have accumulated so many frequent flyer miles when they sent their babies to the Bridge they deserve as much light in their life as possible.

Posted by Foley Monster, Pocket and River Song at 8:33 PM