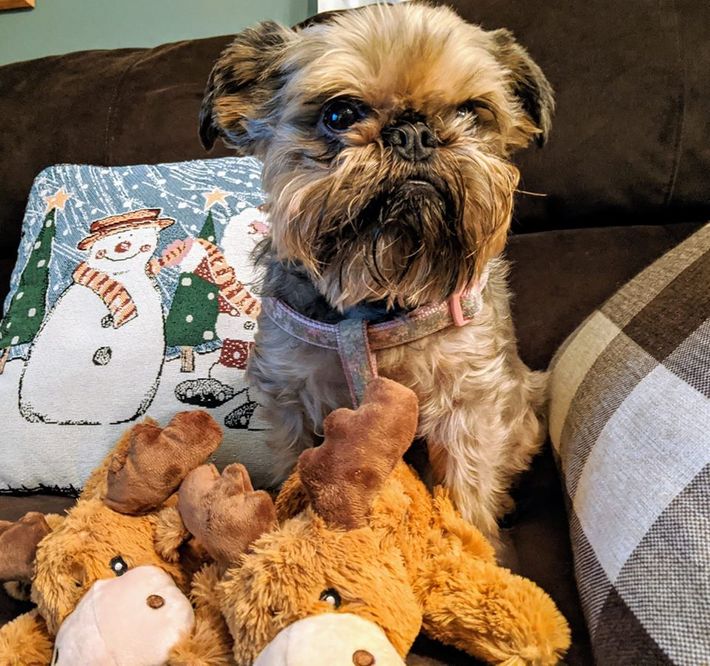 All dogs on the first Saturday of the year elect a pack leader.  Each pup in the family votes.  This is usually a formality.  The oldest dog is traditionally voted in as head of the family.  If there is a tie, the senior dog casts the deciding vote.  The angel emeritus settles any further dispute.

In most packs, it never comes to that.  But most families aren't as dysfunctional as mine.

As soon as you left the house on Saturday, Pocket called for a pack leader vote.  She chose herself, and River picked River.  Pocket then cast the tie-breaker, making herself the winner, at which point River stood and said she strongly objected to the results because Pocket was not a legal member of the household.

"That's ridiculous," Pocket exclaimed.  "I have been in this family for seven years longer than you."

"Yes," River conceded, "but do you remember the story about how you came into our pack?  Mommy says they went to a breeder's house on a Friday night and selected one dog.  When they went back, they were given another, which was you.  You're only part of the family by mistake, and that means your vote was illegally cast."

"That's not fair," Pocket barked sharply.   "You know our parents say even if I wasn't the one that they selected, I was the one meant to be with them."

"They just tell you that to make you feel good.  Regardless of the fact, you were never chosen to live here makes your  vote invalid, and me the pack leader."

A real brawl was about to commence when Pocket sent me a request to intervene in the dispute.  I was happily fishing in the stream, basking in the warm sun when I got the offer.  This family:  Just when I think I'm out, they pull me back in.

I was agitated when I appeared to my sister as a ghost.  I told them both "just the facts, ma'am."  They were excited to see me.  Pocket because she knew I would rule on the side of the law, and River because when I ran for pack leader, my slogan was "At least I'm not Pocket."

I listened to both their arguments and found little reason to overturn the election.  I told River while I understood her issue, I could not in good conscience side with her.  She asked to speak with me privately.

"This isn't about me. It's about keeping the family strong,” she said.  You were the Sonny of the family taken away too soon.  I am the Michael: Cool and calculating.   Pocket is the Fredo weak and dumb.  How can we have sleepy Pocket as our leader?"

She had a point.  I needed to execute a compromise. “You need to let Pocket think she is the leader like Tony Soprano did with Uncle Jun.”

River told me she did not know who they were.  I told her it was a show from the nineties.  “Okay, Boomer,” River cracked. Sometimes she really riled me up.

I explained how River would be the real power while Pocket only a figurehead. River was tempted to take the deal but worried that she would not get the recognition the position brings.

“What recognition?” I asked exasperated.  “It’s like being President of the third grade.  No one outside of the school cares.  Mommy is the don.  She has the real power.  So take my offer, and pretend you are in charge, like the President.”

After considering it and napping for an hour midway through the consideration, River agreed and became the power behind the paw, precisely what she was before the day started.

And I got to go home, and went back to fishing, proud of myself for being the peacemaker, and the child of God.

Posted by Foley Monster, Pocket and River Song at 8:27 PM