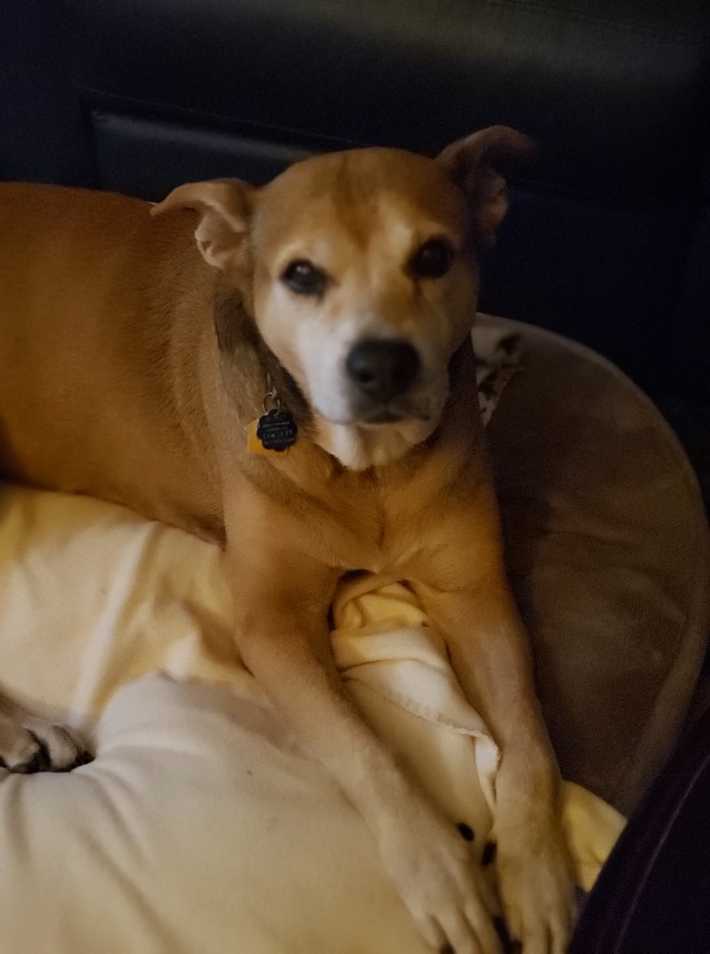 I  stood with Benjamin as we waited for his beloved sister Bella to cross the Bridge.  As soon as a dog passes over, all the pain they felt before their departure from the mortal world disappears.  When Bella started across, we saw what looked like a raw wound on her back, which didn’t heal after she crossed.  “That is strange,” I observed.  “Usually, the  injuries disappear.”

“That is not an injury,” Benjamin said.  “It is our mother’s heart.”

I  looked closer and saw that Benjamin was right; the wound was in the shape of a heart.  It wasn’t the one that pumps blood throughout the body.  Nothing is charming about that organ.  But, there is a second heart that holds all a soul’s love.  When a dog goes to the Bridge, they  always bring part of their parents’ heart with them (the one that holds  love, not the one that plumps blood.  If that one was taken to the  Bridge, people would quickly follow their beloved pup into the dark.)   But, Bella had brought the entire thing.

Bella began life in the most horrifying circumstances.  Her original owner, who has a tiny brain nor heart, tossed her out of a moving vehicle.  Luckily, someone who had their devil well in check brought her to the Blue Pearl Animals Shelter.  She had several injuries, including a broken pelvis and hips.   Bella was given the option to go to the Bridge, but she gave people one more chance and rolled the dice.  From that point on, all she did was throw sevens.  As I have said, every homeless dog needs a hook and having survived being thrown from a moving vehicle worked for Bellas.  Momma Rachel and her husband saw his post.  They knew they must have this dog.

The fates brought them together when Benjamin needed a cat scan at the same hospital where Bella was recuperating.  Momma Rachel was allowed into Bellas’ room, and they fell in love at first sight.  It took 12 weeks and the angels lobbying the rescuer workers for Momma Rachel to get Bella, but there was no separating them when she did. After only three months of Bella being part of each other lives, the dementor angels came for Benjamin, but that bonded them for eternity.

On  Bella’s first night at the Bridge, she was given a critical assignment.  She needed to go with  Benjamin and return at least part of their mom’s heart to her.  At first, Bella was reluctant to give up any of it, but Benjamin convinced her.  Bella knew he was right.  Benjamin  agreed to let Bella keep half his mom’s heart.  It was enough left over for their siblings, or a new dog, to rebuild it.

That night Bella and Benjamin went to visit their sad mom.  They had to wait for her to fall asleep. It took longer than usual because she was in mourning; without her second heart, she tossed and turned, hoping to slip below sleep’s dark and silent gate.   When she finally succumbed and fell into a restless snooze, Benjamin and Bella were able to return half their mom’s heart to her.

Momma  Rachel may not notice that it has been returned, but she will in time,  and she will love again, thanks to Bella, her heart dog, and  Benjamin.

Though it may seem like she is facing her darkest days, Momma Rachel should know she has two devoted angels helping lead her from the dark.

Posted by Foley Monster, Pocket and River Song at 10:43 PM