A Yorkie Reunion at the Bridge. 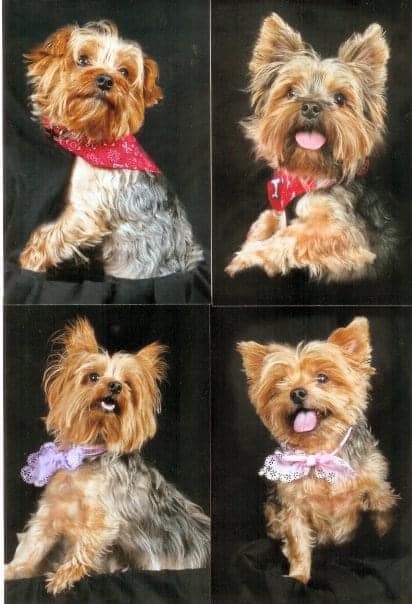 I belong to the most exclusive group at Rainbow Bridge:  The Yorkie angel club. When we add a new member, it is bittersweet.  The more Yorkies, the merrier, but it also means a parent has lost a beloved dog.

Monty was the last mortal member of the M&M pack.  He was his mom’s constant, helping her through the tragedies of losing three other Yorkies, as well as the passing of her husband.  Monty borrowed and begged for heartbeats and refused to show any sign of illness, but it is impossible to hide things from a mom, who knews her little one’s quality of life was suffering.  Monty’s mom let him join his siblings and dad.

Dogs hate leaving their parents but are delighted to be reunited with one they lost.  When he crossed the Bridge I had a difficult time getting Monty to concentrate on the angel oath because when he saw his siblings standing at their Dad’s feet, he scampered up the steps ran to them, barking, spinning around, jumping, and giving his dad 1,000 kisses.

I tried to corral Monty and get him to concentrate, but I understood his excitement because that is a Yorkie’s default setting, and his equally elated siblings did not help.  It was his dad who calmed Monty and instructed him to take the oath.

When the M&M pack visits their mom, their dad accompanies them, and while she is dealing with her latest tragedy, her dad told the pack they needed to see her more often.  They knew that her mind would not remember the visits, but her soul would.

Monty’s dad also goes to the Yorkie club meetings, which is welcomed by all of us because a Yorkie’s favorite activity is to snuggle with a human, and Monty’s dad offers his lap to every dog.  At first, I thought it was a sacrifice, but then I saw the smile on his face, and I knew he loves it as much as we do.

He is not the only parent in our club, but he is the best at throwing the ball for us.  He never fake throws, which is good because it is one of the worst acts of trickery a human can do and would make him an instant minion.

We are also trying to help Monty with his transition to the Bridge.  It is easier when you have a parent with you, but he still misses his mom, and their life together.  One of the best parts of the Yorkie club is when we share stories about our parents, and no one has more stories than Monty’s pack.

I hope his mom knows that Monty is with his family, and is getting better every day.  He no longer has any of the pain or sickness that plagued him the last days of his mortal life.

But, there is not a minute that passes when the pack, and their dad, don’t think of their mom.

We hope she can feel the love pouring across the Bridge.