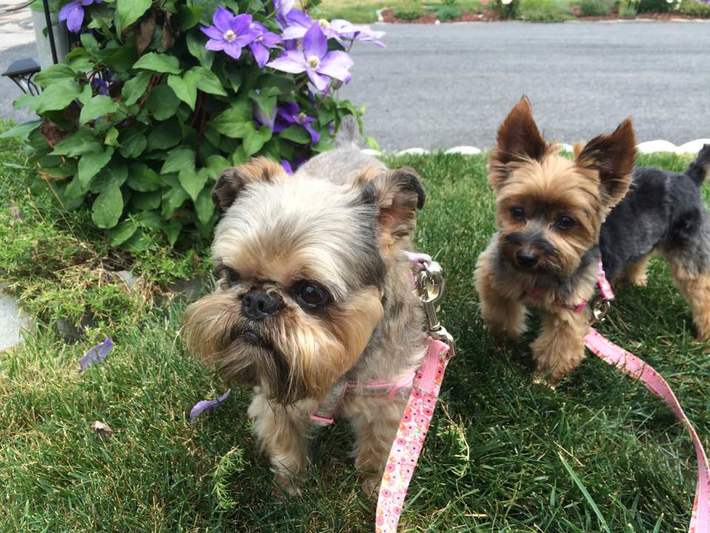 I always loved my harnesses.  They were comfortable and made sure if I trusted my instincts and ran after something I saw on a walk, I would only be able to advance six feet.  It did so without aggravating my trachea.  Plus, I rocked them.  When I visit Mom as a ghost, I check my statue to see the last harness I wore, which is now on my doppelganger. It almost looks as good as it did on me.

It was never a problem finding a harness for me.  I have the perfect body.  But, it is a challenge to locate them for my sisters.  The Gods cursed them with freaky bodies: River has a tiny head and a big chest, while Pocket has a small head and an even more petite body.  All her clothes are Pocket-sized which means they are small enough to be smuggled into an average person’s pocket.

This week my parents undertook the task of finding new harnesses for them.  I don’t know what was wrong with the old ones.  Mommy said they were old and faded, which I thought matched my sisters perfectly.

My parents made the correct decision not to take them with you to the store. It is one thing for your neighbors to know how obnoxious the terrierist duo is, but if people outside the village find out, they will begin to question my mom's reputation as a good pup parent.

The thing about harnesses is that there are no standard sizes.  One company’s small is another’s large, and there is no way of telling which is which.  Buying for Pocket is easy; she is smaller than an extra small, just but the tiniest thing available,  but pin-headed big-bodied River was difficult.

Mommy brought the harnesses home and prepared to put them on my sisters. I flew down to bear witness to the mishegas.  They did Pocket’s first because there was a greater chance of success with her.  Of course, like all dogs, she made the trying on of the harness as difficult as possible.

My Mom put the harness on the floor, placed Pocket over it, put her paws in the holes, pulled it up, and the legs were not inside.  She repeated this five times, each one sure you had done it correctly, only to see Pocket’s leg tucked inside the harness.  Finally, she got it on perfectly.  She tightened the front and back as much as possible, and it was still loose on her.  I told Mommy she was going to need a ferret harness.  Pocket did not think that was funny.  It did fit loosely.  Luckily Pocket does not try to escape, and if she does, she has nowhere to go.

River was trickier. She cooperated less than Pocket.  After ten attempts, the harness was on, yet somehow, it was too long an unheard-of occurrence. It bunched up around her neck.  Mommy tried it in different ways, and they all failed.  “You’re why we can’t have pretty things,” Pocket told her.

Mommy put the faded harness back on her, then got another one from PetSmart that was identical to Pocket’s but was also too big.  River was in that spot that the small was too little and the medium too large.  It looked like River had nothing but faded harness days in front of her.

Then Day found one that was previously purchased for River and put it on her.  Between her coming to live with you and when you got the harness River got a bit fluffy.  The harness was too small, But now, thanks to her green bean diet, she isn’t as fluffy, and the old blue and green harness fits (barely), but that night River refused to lie down because the harness was bothering her, so it was back to the old faded harness for her.

Mommy should know that things become old and faded they work the best.

Posted by Foley Monster, Pocket and River Song at 1:19 PM