For Mouse the Toughest Dog I Have Ever Known 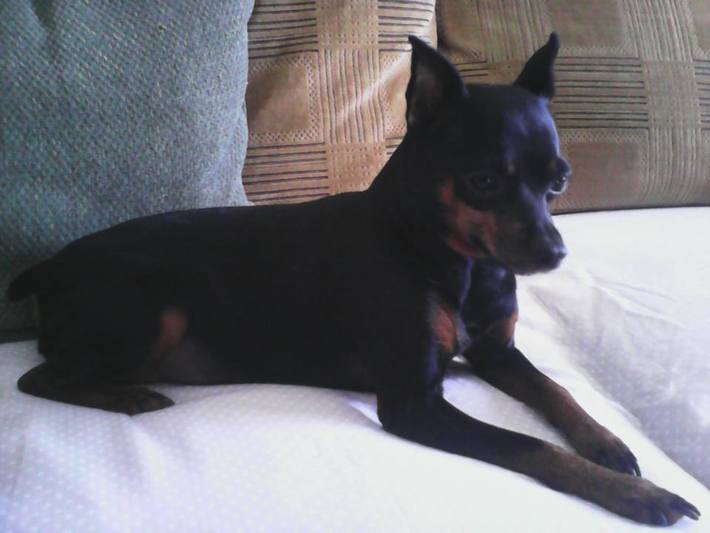 Sometimes, here at the Bridge, when we look into the sky, we can see into the past and the future.  Yesterday, I saw a vision of me sitting on a rocker with many little pups around me.  One of them asked me who the toughest dog, pound for pound; I had ever seen was.

Well,” I said, before pausing to light a pipe, “I have admitted thousands of dogs to the Bridge, big ones, little ones, brave ones, and even some cowards, but the toughest one was a Min-Pin named Mouse.

He came from a legendary pack, known back in the day as the Min-Pin Gang.  They were Mouse,  Raven, Skye, Scooter, Teenie, and Crickette Ann, and they were all brilliant together. Like a tight musical group, they never failed to lift hearts and spread smiles.  Then, one by one, they came to the Bridge, until there was one:  Mouse.

No mother wants to say they have a favorite; although that is the brain talking, the heart says differently.  If you asked Mama Min Pin’s most precious organ, it would say that Mouse always had a little more of her heart than his siblings, and, with each passing, he healed and claimed more.

The Gang made a pact.  The last one with their mom would do everything they could to extend their heartbeats so the woman they loved would not be alone.   That task fell to Mouse, and he was up for the challenge.

As if they knew of the bargain, the weasels in control of the Bridge’s dark side were determined to make it impossible for Mouse to keep his agreement.  They sent the Dementors to hit him with tumors, cataracts, vomiting, diarrhea, and seizures.  Mouse survived them all.   His mom helped him extend his heartbeats, both financially, as each one of these symptoms came with a healthy vet bill and emotionally.  They were both survivors and believed they could handle anything together.

Unfortunately, there is one thing that we cannot defeat, and that is time.  While Mouse beat every disease that they sent, each one took a little part of him.  The weasels stopped sending new illnesses; they knew the time would work in their favor.  It always did

Mouse fought ferociously, but his seizures were increasing in length and strength.  He recovered from them quickly, but he lost a tiny part of himself each time until the last seizure came, and there was nothing left of him to fight.

Mouse and his mom spent as many minutes they possibly could together:  They cuddled up at night, sleeping in the big bed.  Mouse was his mom’s constant:  Always with her, at her side, each breath filled with love.  If life were fair, they would have been that way forever.  But at night, the lions come, driving love apart.

One day last week, Mouse took ill, and his mom thought she would have to help him to the Bridge, but he recovered at the vet, and by morning he was begging for a treat.  But, that was his final rally, the seizures came again, and this time, Mouse the Brave, who fought off the Bridge, the Weasels, the Dementors, age, strokes, tumors, and cataracts, lay down his mighty sword and let his soul be carried to the Bridge, where more than 1,000 dogs whose lives he touched awaited him.

The most important ones waiting for him were his pack, the Min-Pin gang.  They were finally whole again, and they howled in joy, ran, rolled over, nipped, licked, and loved.  They did so when the rain fell from clouds filled with the human tears shed when Mouse passed.  They did it when the sunset and were still doing it when it arose.

Then Mouse led his pack in doing the impossible, to heal their mom’s heart and let her believe again.  It was the most demanding assignment he ever had, but Mouse had his pack to help him.  In the days following his passing, I know that his mom thought she would never be happy again.  But, in time, she did because time is the thing that takes and gives the most. And she had a proud pack of Pins on her side.

And that is the story of Mouse the Brave.  He might be small, but he is mighty.”

I told the young pups I needed to sleep.  It was a lie.  I went to play with my Min-Pin friends, who are still spreading smiles and live to everyone they see.