Foley Says Cricket Food Should Be Left to the Lizards 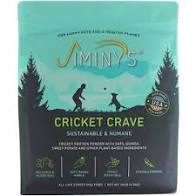 When I visit the mortal side, I like to stop at the pet store, to see the new fashions, offer representation to the jailed birds who are facing an uncertain future fearing they will be sold like chattel, and to check out current developments in the dog food market.

When I was born, there were four foods for dogs:  Alpo; Alpo and Cheese; Alpo Alpo Alpo Whole Grains and Alpo; and Alpo Grain Free Free.  By the time I went to the Bridge, a dog food boon had occurred. Hundreds of companies began making kibble with spurious claims.  They advertised that their protein comes from fish and animals who lived in the lap of luxury until they voluntarily gave up their lives to provide sustenance for dogs, and would, in the words of Mr. Waits:

“it mows your lawn

It picks up the kids from school

It gets rid of unwanted facial hair

It gets rid of embarrassing age spots

It delivers the pizza

And it finds that slipper that’s en-lodged under the

Dog parents are so nervous about buying the best for their pets that they are susceptible to the most outrageous claims.  Pocket was eating some exceedingly expensive prescription food that was supposed to be good for her digestion, and it caused her to poop several giant turds multiple times a day.  Pocket’s colon is like an old water heater:  Every couple of weeks, it needs to be flushed out to get rid of the rust.  The food made the hot water flow all the time, which required frequent flushing.  Pocket is back on her much less expensive food and produces a manageable turd, to the delight of my poo-obsessed parents.

While browsing in the store, I came upon an unfamiliar bag.  It was called Jiminy.  I checked out the ingredients and saw that the protein was crickets.  Bugs?!  This was an improvement?  Give me Alpo, Alpo, Alpo, Whole Grains, and Alpo any day.

I have many complaints about this food, starting with the name.  They named a product consisting of dead crickets after the most beloved bug who didn’t sleep in Charlotte’s web.  It is like calling a chicken-based food Foghorn Leghorn, a fish-based on Dory, or Pedigree cuts the subterfuge and names their food Seabiscuit.  To make this little bag of horror worse, there is a picture of Jiminy on the bag.  Imagine a young child, fresh off reading Pinocchio, and recognizing the little cricket on the bag asking:  “Mommy is Jiminy Cricket in this bag?”

“Not any more sweety, now he is in the dog’s tummy.”  Good luck getting Jiminy to pay for the kid’s therapy.

Then there is the price point:  Per pound, it was the most expensive food in the food.   What is the overhead?  There isn’t a need for cricket husbandry.  There aren’t cricket farms.  They seem to live in a box in the fish section at Petco and on our cellar floors.  If we want one, all we need to do is go to the basement and be patient.  It happens so frequently we don’t even note it, as we would if we found a cow scurrying along the ground. I can picture the Jiminy owner going on the bug equivalent of Shark Tank, Roach Motel, and getting funding for something that costs 13 cents to make, and they charge the consumer 20 dollars.

But, I have found that the longer I am an angel, the more things change on the mortal side.  Maybe this new, young, hip generation will love cricket food.  To test this hypothesis, I brought some to my siblings when they were alone.

I placed a bowl of kibble in front of both dogs.  Pocket, a reluctant eater, to begin with, took one bite and spat it out.  “What the hell is this?” she asked.

She looked at me crossly.  “You have done some mean things to me before, but you never fed me bug,”  I told her it was an actual cricket-based kibble.  She sadly shook her head.  “Another person who went COVID crazy.”

Then we looked at River, who was happily finishing the last kibble.  “How can you eat that?” Pocket asked.

River did prove a point.  Some dogs will eat anything, even kibble-covered cricket., but that doesn’t mean parents should buy it.

My product review:  Zero stars.  My recommendation:  Give your conscience a break and don’t eat a cricket.