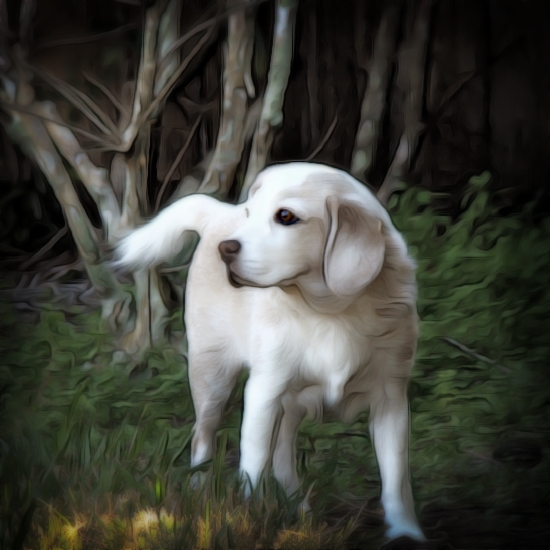 Despite being born in America, my line comes from England, and my heart will always belong where my ancestors roamed. I suppose that is why, when someone stole the royal bones, Queen Victoria came to me to find them.

I put together a crack team to get the bones back, lead by Tommy Tunes, the great strategist, Finley, a tiny dog adept at sneaking in and out of places, and Napa. He commanded an army of homeless pups which he watched over before they arrived at the Bridge.

The Queen kept the dog toys in her royal box. Basil, her heart dog, and his unyielding pack had left the palace to go for a walk with Victoria when the culprit struck. By the time they got back, the priceless bones were gone.

Immediately, Napa picked up the scent. He walked with his head down, sniffing until we came to a river, where it ended. Tommy stood on the banks, looking both ways, and concluded the villain could not swim with the royal bones and that he must have taken a boat.

Finley observed a frog on a lily pad. They keep their council, but Finley is a pleasant chap and charmed the little amphibian until he ribbetted that a black and white dog had rented a boat to ferry boats down the river.

Tommy negotiated a reasonable price to rent a boat, and we took off down the river. Napa, who claimed he could smell royal bones, kept his nose in the air and pointed which direction to go. I was dubious of his abilities. All bones smell similar to me.

Halfway down the river, we saw another boat traveling in the opposite direction. I ordered Finley, our captain, to pull up next to it. Perhaps this was the boat that transported the Queen's bones. When I saw Kane was piloting the vessel, I thought it was another false lead. Instead of hailing us as friends, Kane sped up and tried to outrun us.

This was odd. We had all been friends for a long time. I ordered Finley to follow. When we got near, Tommy jumped from our boat to Kane's. He landed hard on the deck and came up with a gold bone in his mouth. We were stunned to have found our culprit.

Knowing we had caught him, Kane stopped the boat. I asked him what had happened. Before I questioned him, I hoped there was a good reason for the theft.

Kane explained that he was a dog who grew up on a farm. He met many cows in his time and had befriended them. When Kane reached the Bridge, he continued the friendships and met more bovine, including those specially raised to feed the royal family. When a cow named George introduced himself, he told Kane that he had provided meat for the family and bones for their dogs. The pups brought them to the Bridge. Now George had a rare opportunity: To hold his mortal bones in his hoof. Kane knew where they were and snuck into the palace to steal and reunite George with his bones.

Kane then showed us the bones, which he was returning. I knew the Queen would understand, and I gambled she would do more than that. When my team returned to the palace, we came with Kane and a cow named George.

The Queen welcomed George back to the family. Her dogs told George he could keep the bones. They didn't need royal ones; any would do. We left George and his bones in a big field by the palace, happily chewing on grass.

When we got back to the Dooggyspace village, I thanked my friends and crawled into bed. Pocket woke up and asked where I had been.   I enthralled her with the story, but she remarked that it was creepy that. George wanted to have his bones back.

I agreed and said I was happy to be cremated.

There were no bones about it.

Posted by Foley Monster, Pocket and River Song at 11:06 PM