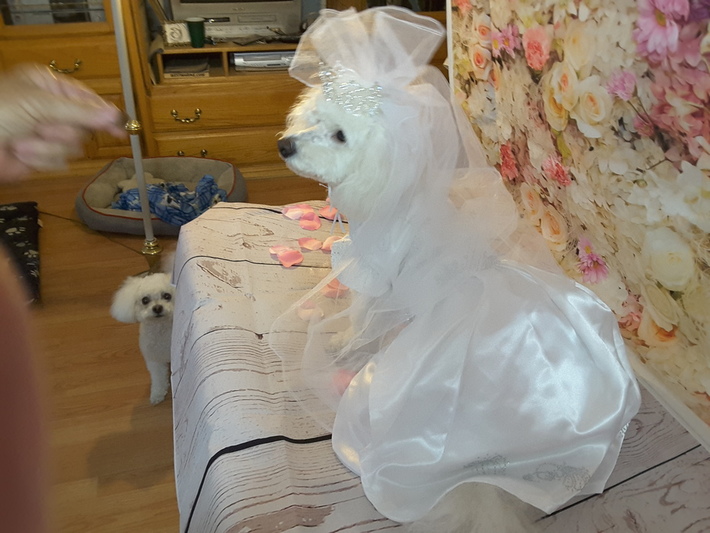 My friends were upset with me. What had started as a lovely picnic with Tiara, Hattie, and Lily ended up with us in a cell in a ship's hull, captured by pirates, all because Pocket found some golden eggs, and I insisted on keeping them.

"I told you that we shouldn't have taken those eggs!" Hattie barked sharply. Every time we found booty and ended up captured by pirates, she blamed me. Lily said there was no time to access blame; we needed to get off the ship. Tiara noticed we had gone out to sea and needed to find another mode of transportation. Pocket chewed on a bone she found in the corner.

Long John Hudson walked down the stairs on his peg leg. He ordered us out of the cell and to go above deck. "That is a wise choice," I told him. "You don't want us as enemies." When we got above deck, a dozen pirates were holding weapons forcing us to go to the bow, where the plank hung over the water. "You can either walk to plank or live in a cage below deck the rest of your life."

"Are you insane?" Hattie Mae asked. "I can't get this dress wet."

None of the pirates were concerned with fashion. They pushed us all onto the plank and chanted jump.

"No, but we are so far out you will be swimming for months before you get home," Tunes said.

Well, that was unfortunate news. I challenged him, asking what would happen if we didn't jump. Long John pulled a gun from his Pocket and said, we would be holy angels. What a fiend! But I had to admire the pun.

They pointed the guns at us, and we had no choice but to jump. We splashed into the cold water and began swimming away. We argued about which way we should go; all of us wanted to go in separate directions. Pocket began to make an odd sound. When I asked her why she said it was whale calls, she learned how to make them in angel school. I asked her why when suddenly a whale surfaced next to us. "I think the better question is, why don't you?" Pocket asked.
Somehow Pocket and the whale talked and reached an agreement. If we could clear the block in the whale's blowhole, he would take us to shore. Everyone thanked Pocket, except for me, who is not overly impressed with whale imitations.

Pocket crawled onto the top of the whale, reached her tiny paw into it, pulled out the obstruction, and held it for all to see.

"Is that a Titleist?" Tiara asked, seeing the golf ball.

Pocket confirmed it was. She listened to the whale. "His name is Benny. He was happily swimming along when two dog pirates began firing golf balls at him. He had been hoping to get revenge."

Pocket told the whale where we last saw the ship. We climbed on the back as Benny raced through the water. In ten minutes, we saw the boat "Ramming speed!" Lily shouted as we headed to the ship. Benny crushed in the side, and it began to sink. We laughed at Long John, and Captain Tunes slid into the water.
Before the ship went down, I saw my bag. I climbed aboard, grabbed it, and climbed back on the whale.

"I don't know why you got that," Lily said. "It's more trouble than it's worth."
Little did I know how right she was.

Posted by Foley Monster, Pocket and River Song at 10:38 PM