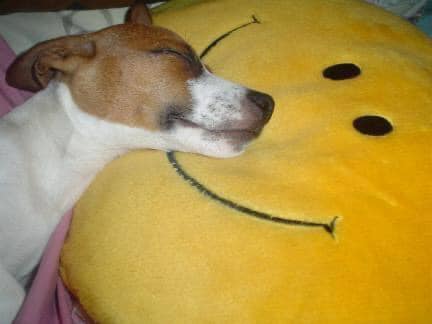 For 18 years, Frodo managed to avoid the dark angels who brought souls to the Bridge.  Perhaps he had a ring that made him undetectable to them.  Whatever Frodo's secret was, he managed to live a long and happy life.

Three days ago, Frodo decided to leave on his terms.  His body was wearing out, and he knew it was time, so he began to bark for the dark angels to take him.  It took five minutes for them to find him, and then, in a blink of an eye, Frodo cast off his mortal coil and arrived at the angel side.

Mama Terrie, who had the privilege of sharing Frodo's life, knew what the barks meant.  She was able to hold him, give thanks that he was her boy for so long, let him know she loved him to the moon and back and gave him her heart before she left.

It wasn't just the dark angels who came for Frodo, but the light ones as well, and when Frodo departed, and something big left the mortal side, the room, filled with a heavenly light.

Mama Terrie knew Frodo's heart better than he did and was aware that it was failing in his final days.  She permitted him to expose himself to the forces that would take him to his last forever home.  As much as it hurt her, she encouraged Frodo to leave, become young again, leave all his pain behind, which she would take, and the enormous pain he had felt after he was gone.

Frodo traveled with his parents, exploring all corners of the country and leaving pee-mail in 32 states, where dogs learned about his fascinating life. In 2006 he was the Grand Prize winner in My Space and Electronic Art's Perfect Pet Contest, besting 2,400 dogs.  His parents didn't need a title to know he was perfect; he showed it to them every day.

Frodo had been failing for so long he had forgotten what it was like to feel healthy, but he had only taken a few steps over the Bridge when his pain was gone, and he felt like he had during the W. Bush administration.  The lively Jack Russell bounded up the stairs, where the angels stunned him by giving him a hero's welcome.  He was so busy traveling and being the perfect dog that he never realized his parents were celebrating his life on social media, which, along with his leaving pee mal in the majority of states, made him known and respected throughout the dog world.

He told me the Grey Havens was more beautiful than he had imagined. Pocket whispered to me that Frodo thought he was somewhere else.  I patiently told her the Bridge was whatever you wanted it to be, and if it gave Frodo comfort to call it the Grey Havens, then that is what it was.

Once he arrived, Frodo began to undertake the most significant task anyone with his moniker had attempted.  He had to ease his mom's pain and get her away from the Gates of Mordor, where the darkness of despair and depression took residence.  Mordor's pull is strong, but so is Frodo's love.  He has been underestimated before and beaten the odds, per example:  How he lived for 18 years in a world where some pups only get half that. Mordor has never been a match for Frodo, and it is assured it would not be now.  It won't' be easy, and will take time, but Frodo is tenacious and won't rest until all the pain Mama Terrie took on when he passed over is gone:  Because Frodo's love rules them all.

Posted by Foley Monster, Pocket and River Song at 10:48 PM