A Trip to the Dark Side Part Two 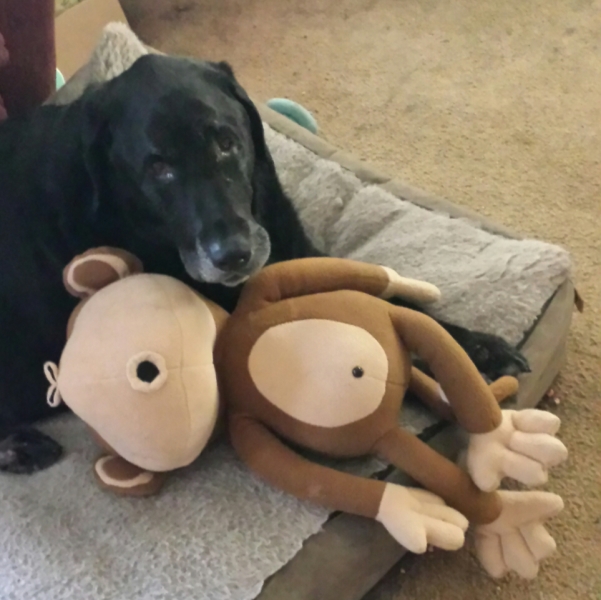 My friend Willie told me about a friend of his from the mortal side, Spencer, who, because of a cleric error, they sent to the Dark Place, where irredeemable souls go.  Unable to find help, Willie turned to me, and I put together a crack team, with Smoochy and Ashton, to penetrate the dark side to save Spencer.  When we did, we were quickly captured, sans Ashton, and they brought us to the Dark Lords, who said we were in our forever home.
Because I was the one who put the expedition together, it was my duty to speak up.  "There must be some mistake!" I said.  "We have a forever home on the light side."
"Not anymore," he said.  "Didn't you see the sign above the gates?  In case you didn't, it says: 'He who comes in may never leave.'"
"I thought it said: 'Free cookies,'" Smoochy said.
"We do have those," the Dark Lord said and sent one of his underlings to bring us a tray of cookies.  Perhaps, we should have been more cautious because they were demon cookies, but we dogs can't resist.  Unfortunately, they were burnt, which we should have predicted, getting cookies from land sometimes called Hell.

After getting our cookies without milk, we were brought to a cell with hard beds and no light because that's how they do it in Hell.  "Foley, do you have a plan to get us out of here?" Smoochy asked.  I told them I did but was lying.

A little demon brought us three bowls of gruel, slipped them under the bars and into the cell.  Smoochy hurriedly went over and began licking it up.  "How can you eat that?" Willie asked.
Smoochy stopped:  "You ever eat kibble?  This isn't that bad."
I noticed a bit of brown fur on the demon's arm and recognized it.  "Ashton!" I barked.  "Are you here to save us!"
"At first, that was my plan," he admitted, "but then I got this job.   It comes with good health care, a 401 K, six week's vacation, and four months' paternity leave.  Honestly, it's sweet."

"But you would have to torture your friends!" Willie said.

Sure, there are drawbacks," Ashton said.  "But there is free counseling, and the pay is fantastic!"
I had heard enough and ordered him to open the door.  He mumbled something about me not wanting to see other Yorkies get ahead, then opened the door.
We hurried out of the cell but did not know where to go.   Ashton said they had given him a Star of Earendal, which could shine light into the darkest of places.  He took it out, and suddenly we could see.
It was horrifying.  There were dogs in cages everywhere, all trapped in the darkness.  "We have to help them!" I said.
"Some of them are here for a reason," Willie said. "We don't want to release a bad dog."

"There are no such things as bad dogs," I said.  "We are born pure, but humans make us evil,"  I told Ashton to open the cages and free the dogs.  He agreed and let them out.  They carefully moved to us.  In the last cell, we found Spencer.  Willie was thrilled to reunite with his friend, and then we began to lead the massive pack of dogs down the corridor.  Then we hit a wall and could go no further.  We would have to retrace our steps and somehow get past the throne room and into the light.  I told the group to follow me when I saw the only creatures who could take joy in imprisoning a pack of dogs.

There were squirrels of unusual size, all wearing armor and spoiling for a fight.  The only way out was through them.
We charged.
TO BE CONTINUED
Posted by Foley Monster, Pocket and River Song at 11:12 PM