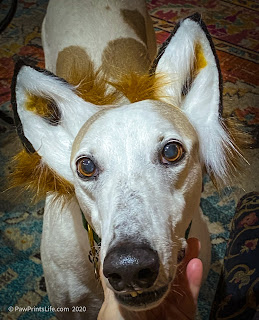 When we lived together, I  considered Pocket\to be a bit of a wimp, but when she became sick and didn't betray her pain for weeks, I realized what a tough little dog she was.

She was not unusual.  When they begin to feel poorly, dogs know that their condition will separate them from a beloved parent, at least for treatment of the problem, and at worse, until the parent follows them over Rainbow Bridge.  Because we never want to away from our parents, we hide our pain until it becomes overwhelming.  That is what Pocket did, and Barney, cut from the same devoted cloth as my sister, repeated her behavior.

By the time Barney began showing symptoms, it was too late for him to recover.  After he came to the Bridge, I examined his medical records and discovered if Barney had shown his symptoms months ago; the result would have been the same, but he and his parents wouldn't have the extra time together Barney's determination granted them.

It was ironic that Barney became sick when the football season started because he had so much wrong with him; each treatment the doctors tried was like a Hail Mary to the endzone. The endeavor was noble but fruitless.  It became clear to Barney's parents that the end was now, and they sent him to the Bridge, taking on all the pain that Barney had been suffering from so he could be free.

In the end, life is lovely, but getting there is a bitch.  In the mortal world, mental and physical suffering fades away like an uneventful nightmare.  Angels miss the souls they left behind, but a grand reunion is inevitable.   It just takes time.  Most importantly, you never lose anyone again.  There is nothing but reunions here, like an airport that only has arrivals.

The brain is a complex organism.  No one can control it.  As is true of all parents, Barney's mom, Rebecca, knows he is gone.  The ache his passing caused is a constant reminder.  But, there is a part of the human brain that doesn't listen.  The section makes a parent reach or a loved one who is no longer there and the perpetually empty dinner bowl, or expects, for a flash, to see the departed.  It is a spasm in the brain that no one can trust, and it, briefly, rips open the wound again.

Barney happily crossed the Bridge, experiencing the joy of being free of pain and excited to see his many online friends and pack members, both quad and bi pawed, who passed before him.  Of course, his heart ached for his parents, but it will ease until it is more like a craving than starvation.

Barney joins the good fight we have been combating in the angel army since crossing the Bridge. It is a battle for our parents' hearts and minds to stop the ache in their chest and cease their mind's obsession with our passing.  All angels are good gardeners who clear the tangled brush that clouds the mortal mind and then plant new growth to bring more love and happiness into their lives.

Gardener Barney is prepared to work in his mom's garden, to remove the pain and longing so that she can go one to dram and love again.

I think when Barney undertakes this arduous task, he will show he was a green thumb.

Posted by Foley Monster, Pocket and River Song at 11:28 PM