A Trip to the Dark Side 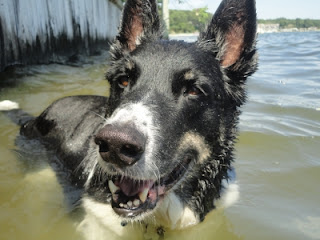 There is a part of the Bridge we do not talk about.  It is called the dark side.  The sun never shines there, and nothing grows.  It is where the genuinely evil species go for eternity, and there is no way to become an angel for all those who enter.

The Powers That Be here don't communicate with the demons who run the dark side.  They might be all-knowing and seeing, but they can't look into the darkness and don't want to either.

My good friend Willie likes to spend his days swimming in the river, but he also works in the Department of Angel Corrections, and while going over a list of dogs who passed but didn't come to the Bridge, he found a pup named Spencer, who he knew in New Jersey.  Spencer had been sent to the dark side after he killed a little dog in its yard.  But Willie knew it was the wrong Spencer, and he went to the Board with his findings.

Willie immediately said he wanted to go with me.  There was no place on the immortal side more dangerous than the darkness.   We needed a team of brave angels.  I chose my fellow fearless Yorkie Chelsea and Smoochy, who never met a challenge that caused him to back away.

We had to go over the mountains and continue to head north.  Smoochy and Willie led the way, while Aston and I needed several breaks.  The larger dogs were patient with us.  Then we came to the gates with nothing but darkness behind it.  I asked them if they wanted to turn back, but none of them did.  We plunged into the night.

I had brought a backpack filled with supplies.  The first one was a flashlight.  I turned it on, but the light barely cut through the darkness.  We tried to light matches, but the darkness snuffed them out.  While not being able to see was a hindrance, dogs rely on smell, which would lead us to Spencer, or so we hoped.

Willie took the lead.  He was the only one who knew what Spencer smelled like, and hopefully, he would recognize his friend's scent in the darkness.   We could not see the nose in front of our faces and kept bumping into each other. Ashton asked me to switch places.  I thought it was because he was brave and wanted to cover my back, but my head went up Smoochy's butt every time we stopped.  It wasn't fun for either of us.  I didn't appreciate Ashton snickering each time it happened.

Suddenly Willie stopped short, and we all crashed into one another.  It took us a minute to realizes that something had trapped us in a cage, and Ashton was no longer with us.  Suddenly dark hooded creatures began dragging us.    We were brought into a dark castle and dumped on the floor.  We looked up to see a massive, dark lizard sitting on a throne with a long tongue.  "Welcome to your forever home," he said chillingly.

Posted by Foley Monster, Pocket and River Song at 11:06 PM