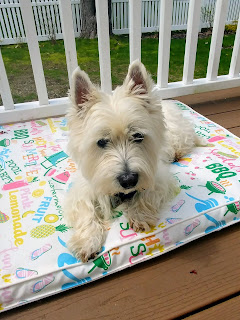 it is always a mixed blessing When a friend joins us at the Bridge. While we are happy to see them, we are sad they have arrived. It is the same emotion people have in the Jury House on Big Brother:  great to see you. Sorry, you’re here.

When word came that Winston from the great state of Maine was arriving, I had to quell Pocket’s enthusiasm. While they never met, my sister did spend an afternoon at Aunt Laura’s house where she was chief snuggle bug and cuddled with Bentley’s momma Madison. Pocket investigated all of Bentley’s scents, and when Momma Madison got home, Bentley did the same with the smells Pocket left. Subsequently, they became sniff pals.

Bentley was one of the few original members of Doggyspace, where dogs and parents met via the Internet 14 years ago and became lifelong friends. Bentley came to the Bridge a couple of weeks shy of his 17th birthday. His mighty, tiny body had finally succumbed to age. His mom knew Bentley was in her heart, and the only way to set him free was to shatter it into a million pieces. Bentley was free, and Momma Madison faced her greatest challenge:  living with a massive hole in her heart without her best friend.  Bentley’s brother Winston is with her and working on driving the sorrow away, but it will take time. Little dogs leave big holes.

When comforting a bereaved parent who has lost a dog they have lived with for more than a decade, people desperately trying to find the right thing to drain the fountain of sorrow will remark that the parent should be happy the pup lived a long life. But every day you live with a dog, they claim more of your heart that they take with them when they go. Parents don’t feel fortunate they had a dog that long. Grief is the enemy of reason. They want the pup today. Yesterdays are gone, never to come back.  Yesterday doesn’t matter when there is no tomorrow.

Bentley had, in his final mortal year,  an eye surgically removed. Anesthesia is dangerous in Smart and older pups. Bentley came through the surgery like a champ and didn’t let his lost eye slow him down. A week before his passing, he walked around the block. As much fire still burned in Bentley, his heartbeats were expiring, and when they did, his mom knew she had to make the ultimate sacrifice and send him to their forever home for the long wait until she joined him.

Bentley, being a friend of mine, had an advantage other new angels did not. I had visited him many times in his dreams and advised him what to expect upon passing over. Bentley ran over the Bridge with his tail wagging. He bounced up the stairs to Hobo’s landing and gleefully took the oath. When the rain seeded by the tears of so make people who mourned Bentley began to fall, I gave him another important lesson:  he no longer had to pretend he wasn’t in pain so his mom wouldn’t worry. Bentley nodded, and his tears joined those of the mortals on the grass.

Fortunately for Bentley, he is a Doggyspace pup and has dozens of angel friends who began working to repair his broken heart. Once we do, he can start working on his mom’s. On his first day, Bentley met so many old friends the sadness began to drift away. By the weekend, Bentley was strong enough to start helping Winston help their mom.

Doggyspace may have shut down five years ago, but to us dogs, we are still family and will work together to heal all our mons’ hearts until all members, their siblings, and parents make their final journey.

Posted by Foley Monster, Pocket and River Song at 10:09 PM