Abbie Has an Important Message to Deliver 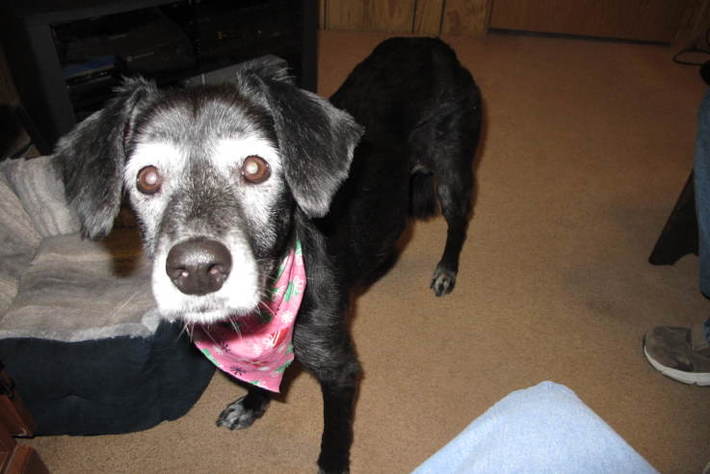 Abbie had a message that she desperately needed to deliver.  Having exhausted all the possibilities, she could imagine she came to me for help.

I asked who she meant the communication for and what was in it.  She answered that it was private.  This would make it challenging to help, but difficult is my middle name:  I remember being told I was the most difficult dog in the world.

I hoped it was someone at the Bridge; that would make it easier.  Alas, she meant the message for a mortal.  "Your mom?" I asked.

"I should have known you would figure it out," Abbie said.  As much as I like to give myself credit for being clever, there was only one being on the mortal side it could be.
I inquired what the problem was.  "Every time I try to get my message to mom, her subconscious blocks me.
It was a common problem.  Humans are the only ones with a subconscious.  The rest of us have enough problems dealing with a conscience.  People have developed one to block from what they can't accept:  Dream message from dogs included.

It was a problem as old as time.  Abbie and I sat on the grass and tried to think of a way around this problem.  "I wish people could remember the good dream-thoughts like they do nightmares," she observed.


That was it!  Nightmares always have a way of worming past the subconscious and being remembered, at least briefly.  If Abbie could access one of them, her mommy would see her and hopefully remember.

But, accessing nightmares was a particularly tricky business. Demons create them in a cave beneath the Bridge, ringed with fire, so there are no trespassers.  No dog had ever got through the barriers to be part of a nightmare, but Abbie was determined.

We bravely jumped through the fire and then carefully put out our burning tails. Demons ran around the office like  The Weather Channell meteorologists when a hurricane hit the upper east coast.  We had to move carefully until we came into the room where they created the nightmares.  Fire, horrific screams, sharks, vampires, pantless students, and a second Trump term could be seen everywhere. Abbie found her mom's nightmare.  She was driving back from visiting her brother on a dark road when she got lost.

Demons began to appear walking down the street.  Abbie bravely jumped into the nightmare, and I, too afraid to stay, jumped after her.

We landed on the road with the demons where Abbie saw her mom in the car and ran towards it.  Her mom screamed and backed away.  A confused Abbie didn't know why she was leaving when I caught our reflection and saw that we looked like rabid raccoons because it was a nightmare.
I told her not to dismay; the first thing we did was chase the demons away, so her mother could get out of the nightmare.  Being a rabid raccoon gave us super speed, and we chased off the evil and then led Abbie's mom from the bad dream.

Before her mom woke up, Abbie, in raccoon form, jumped on the hood of the car and gave her a message:  "I love you, Mommy."

Abbie would have liked to give her message in her own body, but her mom got it, which is what mattered.
And, if Abbie's mom happens to read this, and you are wondering why a raccoon loves you, understand it was Abbie, getting you a message against all odds.

Posted by Foley Monster, Pocket and River Song at 10:51 PM