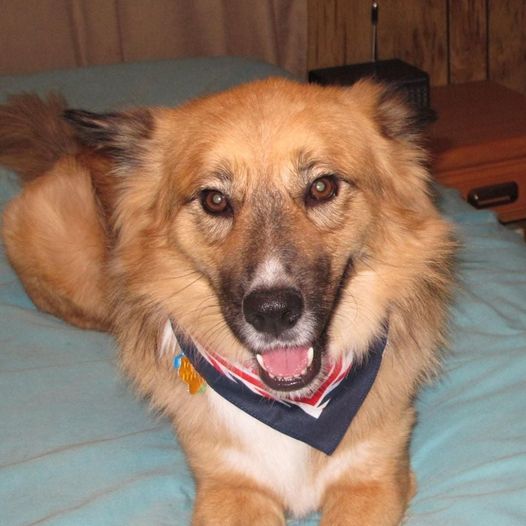 Abandoned by his family and left to his own devices on Texas streets, Max vowed never to trust another human. He would have continued on that path for the rest of his life except for the determination of one mom.

When Mama Gail saw Max on the streets, she tried to lure him into her home with food left for him on her steps. He would gladly partake of it if another stray didn’t get it first. When Mama Gail approached Max, he skedaddled. And yet the lady persisted.

Slowly Mama Gail built trust with Max until he relented and joined her happy pack of dogs. He perfectly fit in the pack and Mama Gail’s heart.

Max was still filled with wanderlust and always attracted to the open road making his mom diligent about closed gates and open doors. But he now loved and trusted another human, something seemingly impossible when he ran the streets.

Max came into Mama Gail’s life in middle age, which means his time with her was limited and made their appreciation even stronger.

When Mama Gail found the lump on Max’s paw, all his friends who became invested in his story prayed for him like he was one of their own. Unfortunately, it was a fast-moving aggressive form of the disease. His mom tried medication, but Max, who used to run the streets daily, could now barely walk. His mom gave him back his youth and vitality while taking on all his pain and sending him to the Bridge.

Max was now going to his second forever home. When you are a homeless dog, you have no one waiting for you when you pass. When max relented and entered Mama Gail’s house, he guaranteed a family for eternity.

We angels worked hard to convince Max that he should abandon the streets and go into Mama Gail‘s house. We have been invested in our friend’s life since. When Max crossed, we turned out in the thousands to welcome him and give this brave dog a howl salute.

Max’s mom’s angels greeted him when he crossed over. They were experienced and devoted to helping his transition by teaching him the ways for an angel to visit his mom. Hopefully, she still has remnants of her childhood heart that allowed her youthful self to believe in what adults are conditioned to think impossible.

The only question we had for Max was if he wanted to live in a house or roam the streets. He probably told us his roaming days were over. His loving mom made him a house dog, and once he knew her devotion to him, he never wanted to be on the streets again.

Max taught all the mortals a lesson. Never give up on a stray because when you finally coax it into your house, it will reward you with overwhelming love and be yours for eternity.

At the Bridge, it is called Max’s Law.