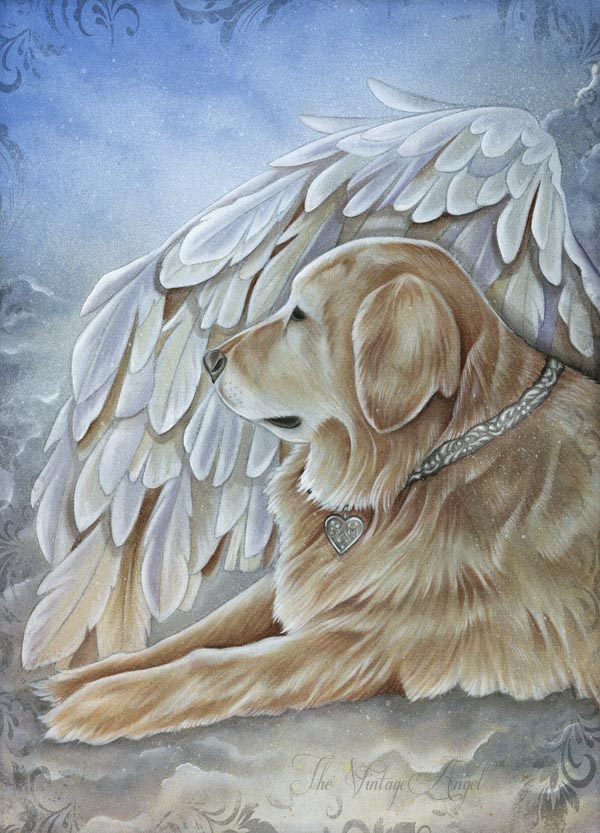 We were all worried when my new friend Wakefield, who came here with no family or predecessors and belonged to a lone homeless human, disappeared from the Bridge just when I had put together a team of angels to help him realize his angel potential.

"He must be on the street; that is where he was the most comfortable," I said.
"There are only a million miles of streets here," Hobo observed. He wasn't wrong.

But Wakefield couldn't have gone far because he didn't even know how to fly yet. I found a picture of him on my IPaw, sent it to my friends, and we began to look. When I heard Kane's excited barks, I knew he had been located.
Wakefield was sleeping on an abandoned blanket by the dumpster. He saw us gather around him and insisted he wasn't going to move because this was the place his father would look for him.

I agreed that was true, but what if Wakefield could help his dad, so he didn't have to live outside and eat out of a dumpster. As an angel, Wakefield could guide his dad into making better decisions and maybe get him off the street and help him create a family.

At first, he said no, when an impatient Hattie told him to stop being foolish, put aside his being hurt, and help his dad because that is his purpose in the world. The direct approach snapped Wakefield from his sorrows, and he realized he had to help his dad.

The first lesson came from Lily, who taught Wakefield to see all the possibilities for his dad and choose the best one for him. There was a homeless shelter nearby, and Wakefield wondered why his dad never went there. Then he saw the "No dogs" sign, making him feel happy and sad simultaneously.

Kane told Wakefield there was no reason for his dad not to go there now. Hobo explained how he could get into his dad's dreams and convince him not to accept no an answer. "Keep suggesting it until he listens," Hobo, used to stubborn dads, advised.

Tashi gave Wakefield a makeover so he would be more dream presentable. Tommy used his computer skills to print out all the services his dad could take advantage of; slowly, Wakefield got his dad into the shelter and an apartment.

Now an experienced angel Wakefield was able to take care of the last part himself; he found his dad another dog to cure the loneliness in his heart. It took weeks, but by the time Wakefield was done, his dad had a job and became self-sufficient, thanks to his faithful angel.

Wakefield learned that life is better in a group and passed that on to his dad. His dad told him the day Wakefield came into his life was his best day, and little did he know how right that was.

Now Wakefield has his own home for himself and all the angel dogs his dad will send to the Bridge over a long prosperous life.

Wakefield learned life is better with a village, and we are lucky it is ours.

Posted by Foley Monster, Pocket and River Song at 8:52 PM